Published by Lorilyn Roberts on December 13, 2010 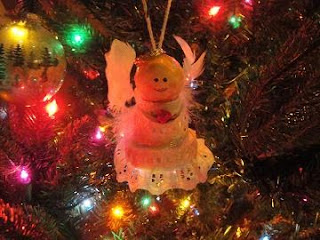 I never thought roach droppings would become part of one of my favorite Christmas stories. But stories have a way of writing themselves on our hearts. Each year between Thanksgiving and Christmas, my sister Paige invites my brother’s family and my family to her house. The kids join us at the dining room table where lots of interesting knickknacks are transformed into Christmas decorations. Paige is an artist and enjoys sharing her talent with the children. It is a good thing for my daughters. Most of my art projects as a child didn’t go as planned. I always missed an important step along the way and my results were, should I say, memorable, but for all the wrong reasons. So I watch as the others dive in and create beauty.

Last year all the cousins created angels to hang on the Christmas trees. The little angels were dressed in white lace, had feathery wings, and a red rose dotted the front collar. Instead of halos, the kids crowned the angels with macaroni noodles. The golden hair created the same effect. Joy was proud of her angel and when we returned home from the long trip, she hung it on our Christmas tree. Christmas came and went. January rolled around; I reluctantly took everything down and packed the ornaments away in our attic for another year.


Last week I climbed up into the dark, dusty attic once again to pull out the Christmas tree and ornaments. Joy set up the tree and I opened up the first container. When I unlatched it and looked inside, dozens of roach droppings littered the bottom of the box. A few tumbled out onto the living room floor. Several of the ornaments had brown pellets clinging to them. I was quite repulsed, only slightly less than I would have been if live ones had scampered out or dead body parts had been left behind. I wondered why one suitcase had so many, though I found a couple in the other suitcase also. In years past there had never been any.


I fetched the vacuum cleaner and vacuumed up all the droppings. Visions popped in my head of hundreds of roaches crawling over my beautiful ornaments that I had accumulated through many Christmases. I grabbed some paper towers and wiped down the inside. How many roaches would it take to make that much crap? I cringed. Living in Florida has its dark side. I always hated climbing up into the attic. Now I hate it even more.

Then Joy cried out, “Mommy, my angel has no hair.”

“What happen to her hair?”

“I think the roaches ate it.”

We broke out laughing. The roaches had spent the whole summer feasting on my daughter’s angel’s macaroni hair! I am sure Joy will always remember this Christmas, but probably not because of any presents she received.


As I think back to my fondest Christmas memories, many of them are also quite eclectic. There was the Christmas in downtown New York when we got trapped inside a car on fire. The electric windows were stuck and my grandfather smashed the driver’s side window with a suitcase. I remember the screams. Mother pulled me out through shards of broken glass. Sirens blared and emergency lights flickered in the cold night air. We never did get to see the lighting of the tree. We spent the evening in a fancy hotel. Later Mother told me a Hollywood director was there for a children’s beauty pageant and had pleaded with her to let him take me to Hollywood. He wanted to make me a star. It sounds crazy but it’s true.


That was when I lived with my grandparents. My mother had just divorced and sent me to live with them until she found a job and place to live. I chose my mother’s pink bedroom to be my bedroom that winter, pretending I was her when she was little.


My most vivid memory from that cold, snowy winter was Christmas Eve when I heard Santa’s reindeer pounding on the roof of the tall apartment building. It was a loud swishing sound followed by gallops that woke me up. I didn’t believe in Santa Claus until that night. I lay in my warm bed imagining what Santa and his reindeer looked like. I wanted to jump up and peek out the window, but I was afraid if I saw them, he wouldn’t leave me anything. The next morning I ran to the window and looked below from thirteen stories up. To my surprise, there were large sleigh marks in the snow. Larger than any sleigh I had ever seen. I stared out the window for a long time.


I’ve thought about that more this Christmas than any other in recent memory because of a strange conversation over Thanksgiving dinner. I asked my brother’s wife if all their kids, who are younger than the rest of the Roberts’ children, knew there wasn’t a Santa Claus. As we talked, I shared my experience about Santa Claus at my grandparents’ apartments when I was little, but I mentioned only the part about the sleigh tracks in the snow.

Mother responded immediately, “I saw them, too, and heard Santa land on the roof!”


“You did?” I asked surprised. “I also heard the reindeer hoofs pounding on the roof. The swishing sound woke me up.”


There was a silence as we all thought about the strange coincidence. Mother had shared about the rooftop noise before I brought it up. Everyone looked at Mother and me like we were demented. To this day, I have no explanation. Sometimes I wonder if God allows fanciful moments to bring comfort to children. Maybe that’s what I needed at that time—to have something to believe in. Maybe that’s what my mother needed, too.


One Christmas my parents thought they were rich. They bought me a very special present. I was eleven, and the gift still sits in the top of a closet. On Christmas morning, I tore into the Christmas wrap and discovered a brand-new television set. I watched many episodes of my favorite show, Star Trek, on that TV. I took the television away to college. When I was older, I lugged it into the office and watched all the Apollo launches. I never missed one—except the Challenger that blew up on the launch pad.

Today the TV is a dinosaur in this age of color, digital-only cable/satellite/internet connections. But I still won’t part with it. When I see it in the closet, I am reminded of a pastime I can never have back. My father and grandparents are gone, my mother has remarried and doesn’t even live in the same house as we did back in those days. My brother and sister have families of their own. I am old (though not gray) and live in a different state. We have lots of TV’s that are far superior to that one. In fact, the TV takes up valuable real estate that could be devoted to something else more useful.

When I was in Vietnam on Christmas Eve to adopt Joy, who is now twelve, beautiful Christmas music wafted through the streets of Hanoi. It was here that unfathomable suffering occurred during the Vietnam War. Today many believers in Vietnam are locked behind dark walls for believing in Christ. But God’s words filled the nighttime air. I rejoiced, so far from home, realizing nothing can silence what God proclaims from the mountaintops—or loud speakers hoisted on poles in a godless nation.


God’s love reaches to the ends of the earth—in Nepal, where children love Jesus despite the Marxist Moasts who have killed many Christians; in Israel, where shepherds tend their flocks on the same hill where angels proclaimed glory to the newborn king. If we did not speak of the baby wrapped in swaddling clothes at Christmas, the rocks would cry out. The mountains and hills would burst into song. Wonderful Counselor, Prince of Peace, Mighty God, Everlasting Father; the greatest gift of all came through the birth of one small child on a Christmas morning two thousand years ago.

Joy’s hairless angel hangs proudly on our tree this Christmas (though I wish I could de-sanitize it some). All the gifts will be opened Christmas morning. I will eat far too much chocolate candy and then bemoan the five pounds I gain. I will make my usual promise to start exercising on January 1, which I will probably break by the middle of the month. We will enjoy all the traditions that this wonderful season brings, full of joy, giving, and love. Then the ornaments will be taken down and packed away until next year. Hopefully, the roaches will find something else to eat besides an ornament’s angel’s hair. My black and white TV will remain in the closet because I can’t bear to part with it. Life will resume its regular course, and I will be glad for the start of a new year.

But for now, during this joyous Christmas season, I will pause to reflect on the gift of the baby Jesus, wrapped in swaddling clothes, lying in a manger, knowing someday, too, I will bow before the new-born King. And, just maybe, there won’t be any roach droppings there!