Spread the love
Reviewed By Divine Zape for Readers’ Favorite 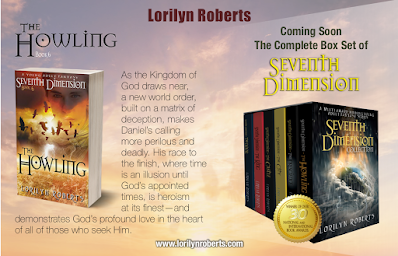 The Howling: A Young Adult Fantasy is the sixth and final book in the Seventh Dimension Series by Lorilyn Roberts, an engrossing, delightful young adult fantasy that is filled with action, reflecting spiritual realities that are as transporting as they are inspiring. The narrative begins with a chariot race, a spellbinding competition between Daniel Sperling and Tariq, packed with intense emotion as readers watch the two daring competitors, but the race finishes quickly and in the stars. Daniel enters the Seventh Dimension, being one of the Jewish evangelists called by Yeshua and shortly before the return of the Messiah. The kingdom of God is near and there are challenges with a deception taking center stage in the life of the people. Daniel has to persevere and discern the light from falsehood. Can he complete the journey he’s begun without failing?Daniel’s love for Shale and Shira is one of the themes developed in this story. The events unfold in the first-person narrative, including Daniel’s and Shale’s viewpoints, and this allows readers to follow the story from the perspective of each character. The prose is exceptionally good and packed with spiritual symbolism. The chariot race is both an evocation of an era in Jewish history and the symbol of life. The book is filled with insightful and uplifting passages, defying time and space to present a message that inspires readers to look beyond time to see God’s presence in the “now.” Lorilyn Roberts states that “Time is an illusion until God’s appointed times,” thus inviting readers to consider end times from a fresh perspective. Apart from the beautiful prose in The Howling, the story is fast-paced and filled with twists that make for an enjoyable ride. I felt as though the story was taking place in my mind.
Order from Amazon
Order from Barnes and Noble
Order from Apple
Quotable Quote from The Howling
The wiry man whipped out his hand and pointed with a dramatic flair. “Have a seat. If you qualify after this demonstration, you’ll be given a special seat in the real dream reaper.” I looked behind the salesman at a most unusual contraption.
The woman was in her late twenties or early thirties and appeared to be in good health. Youth was leaving her, as it does for all of us, but she was too immature to have attained wisdom.
The woman poured out her heart to the stranger in extraordinary detail, expounding on all the unfair and unjust things that had happened to her, leading to a life in the gutter of despair. Always the victim, she wallowed in self-pity and rejection.
The merchant smiled. “You’re just the right person for the dream reaper. You deserve better. Don’t worry about the cost. You can pay it off in the next thirty years before your date with death.”
Published inPraises for Lorilyn's Books