Published by Lorilyn Roberts on January 3, 2018 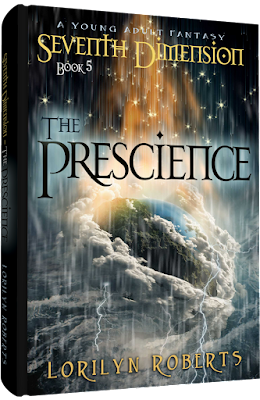 Seventh Dimension – The Prescience is a religious fantasy fiction by Lorilyn Roberts. Shale and Daniel are caught amidst a bombing in Jerusalem. Using one of her unique skills, Shale is led to help a newly orphaned child beside her dead parents. The dog that brought Shale to the child said they were the ones God had called to look after the child, but at 18 they were little more than children themselves, despite their experiences.
Trapped in Jerusalem, they decide it is safer to head back to the first century where they had met. At least there they had a chance of discovering what was going on and what was expected from them. The Antichrist will soon rise to power and, for some reason, demons have an interest in the child they had rescued.A believable setting is enhanced by snippets of realism, such as people’s limitations. My favourite example is that a person who had studied a language couldn’t fluently understand the native speakers, and this is just one such example of attention to real-life details.
Seventh Dimension – The Prescience is a very religion-oriented book, yet there are some original and interesting interpretations of ideas often used in such literature. As a reader, you are rewarded with subtle intricacies which add alternative perspectives and interesting ideas. Good versus evil in the most primal sense. Angels of good against angels of evil, each attempting to turn the tide in their favour. The chapters are short and concise, making it easy to pick up and put down; that is if you can tear yourself away from the adventure.
I read Lorilyn Roberts’ book in a single sitting, finding it engaging, action-packed, and fascinating. The main protagonists, Daniel and Shale, show growth individually and as a couple as they face the challenges before them with faith and unity, trying to solve not only the mystery of the disappearance of Daniel’s father but the meaning behind everything happening and how it is connected. A great read, and easy to lose yourself in.
To learn more or purchase from Amazon, click here.
Published inPraises for Lorilyn's Books