Published by Lorilyn Roberts on November 6, 2012 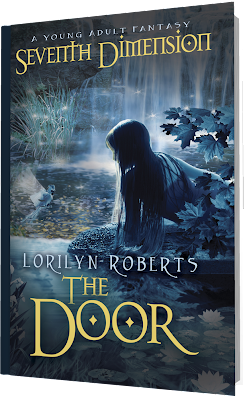 Shale Snyder is smart, determined, impatient–and a troubled teen. Abandoned by her father, misunderstood by her mother, step-father and school authorities; accused of cheating, isolated from her best friend, and bullied by other students? It is a crazy, difficult world she lives in–hard to know what to do, when to fight and when to walk away. Comfort comes in unique ways. The school counselor says she is gifted and an apparently homeless dog adopts her. When Shale runs away from home with her broken birthday gift (yet again) it is understandable.

In her flight, a weak ankle gives way; her head hits a rock and so begins the inner journey that changes everything for Shale. While unconscious she enters a dimensional door that leads her further and further into another time and place. She is chased from an idyllic garden through a second door to enter the time Jesus walked this earth and taught.

She comes face to face with the enemy of her soul and eventually defeats him. She briefly meets her long-absent father and wicked stepmother. She hears a wonderful teacher, discovers He is THE KING and then meets Him and is changed by Him. She brings her half-brother to Him for healing and during this time in this dimension finds the love of her life. Oh, yeah, she also talks with animals during all these events! There is plenty of drama; in fact, it seemed almost non-stop!

Arriving back in her own time and dimension, she finds people have changed. It is almost as if changes in the spiritual dimension have an effect on people in the natural dimension.

The issues of unfairness, injustice, not listening, and not taking people seriously were strong themes throughout; themes that many teens relate to. I felt that Roberts did an excellent job of incorporating the teachings of Jesus into the resolution of Shale’s problems. Her characters were well developed. Some characters I loved right away and others I disliked immediately. Some grew on me slowly–I think young people would relate well to both the characters and the issues. There is a final warm fuzzy but I don’t want to spoil it for you!

This is a book that I could recommend to teens interested in fantasy or who are dealing with similar issues as those Shale encountered. I would also recommend it to adults/parents of troubled teens to help give them an understanding from a teen perspective.