Published by Lorilyn Roberts on December 21, 2011 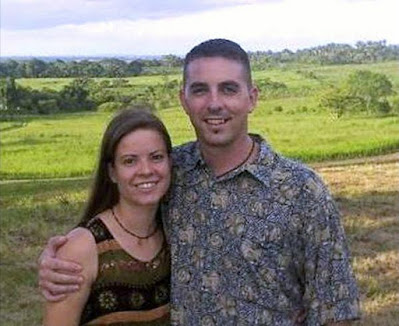 During my 4 ½ years at Anderson University (Anderson, IN) I had the opportunity to participate in three spring break bicycle trips organized by Jim & Louise Pickens.  This dear couple called these trips the “Recyclers” in the spirit of 2 Corinthians 5:17 which says, “Therefore, if anyone is in Christ, the new creation has come: The old has gone, the new is here.”   Each year, they would send a simple flyer to AU students in hopes of filling forty spots to trek across a different 400-mile route in Florida.  Upon receiving this flyer my freshman year, I was immediately intrigued and set out to find a way to come up with the $170 fee.
Little did I know what kind of impact Jim & “Lulu” would have on me over the course of my time at Anderson.  They practically became my grandparents away from home since I was literally 2500 miles from my family in Oregon.  It became a tradition to come over to their house (merely a block from campus) on many a Sunday where they fed me a hearty meal and allowed me to do my laundry.  Along the way, I think Louise took me through every Recyclers photo album she ever put together and Jim was quite possibly filled with more stories than any man I ever met.  It was nothing to come over to their house at noon and leave at 7pm.
In one of their across the country (3000+ miles) summer bicycle trips, Jim recalled spotting a set of “brand new looking” tire chains on the side of the highway in Arizona where temps were over 100 degrees.  “I couldn’t pass on a perfectly good set of chains”, Jim said.  So he put all four tire chains (over 60 lbs) around his neck and pedaled the remaining forty miles to their destination!  I kid you not, the man had tree trunks for thighs well into his 70s and THE most powerful handshake I ever encountered.  He was a legend.
The spring break trips certainly attracted students of varying backgrounds and skill levels.  From foreign students with virtually no cycling experience to guys who could give Lance Armstrong a run for his money, we had quite the mix and match.  Jim & Louise had a gift of meshing everyone together as a team…Team Recyclers.
Not About the Bike
One of the most vivid things I experienced on these adventures is the power of prayer.  If you were uncomfortable praying in public coming into the trip, you were comfortable doing it by the end.  Each morning began with a short devotion led by someone different each time.  Following the devotion, everyone picked a name out of an envelope and this was the person you prayed for all day during the 40-80 mile ride.  If someone wrecked, we would jokingly ask if their prayer partner was sleeping on the job.  At the end of each cycling break which came about every 10-15 miles, the whole group of forty riders would gather in a large circle while holding hands to pray.  This had to be an interesting site for drivers who saw us along busy highways.  We attracted our fair share of honks.
And what were we praying for?  I forgot to mention that Jim & Louise built a faith component into these trips.  Each day, we had no idea where we were going to sleep that night.  Most of the time it was churches but we rarely knew exactly which ones when we began each day.  There were many days when our place of lodging didn’t materialize until the last minute and in the last moments of daylight.  But the Lord always came through.  This spoke volumes to people of all faith levels.
Another example of seeing the Lord come through came in the form of his protection.  We always made an effort to ride on roads and highways that had ample shoulder space or specific bike paths available but this wasn’t always possible.  One day we found ourselves on a fairly busy road with almost no shoulder and traffic buzzing by at 50mph.
I happened to be riding behind a Lebanese girl named Michelle who was one of the more inexperienced riders when her bike went off the road and onto the gravel alongside.  Unfortunately, she overcompensated as she tried returning to the paved road too quickly.  In a split second her Schwinn Voyager crashed and she went spilling into the busy highway.  Not having any time to react, those of us behind her rode over her bike before coming to a stop.
Amazingly, she avoided being hit by any cars and sustained mere scrapes and bruises.  The closest car that would have hit her pulled over a little further ahead and a man got out to make sure she was ok.  “I felt a strong urge to slow down shortly before the girl wrecked”, the man said.  “I just felt like something was going to happen.”  After realizing we were a Christian-based group, the man was thrilled and said he’d given his life to the Lord only a month before.  Quite shaken by the experience, Michelle decided to ride in the Recyclers van for the remainder of the trip but she was thanking God that she was still alive.
Imagine having thirty years’ worth of stories from these trips.  All the chances to see God provide and show Himself to so many.  All the friendships and bonds (and marriages) formed along the way.  Never realizing you could eat so much oatmeal in one week.  Praying like you never had before.  Experiencing Jesus in ways you never dreamed.
Thanks for that flyer Jim & Louise.  I’ll never forget you
Published inGuest Post