Spread the love
Several months ago, Laura Davis featured me on her blog when I began working on Seventh Dimension – The Castle, Book 3. Now that The Castle is finished, I decided to repost it here as it shares a lot of my writing journey for the Seventh Dimension Series. Enjoy.
LAURA DAVIS:  For those who aren’t familiar with your work, can you tell us a little about yourself.
LORILYN ROBERTS: My early childhood would make good fodder for a Hollywood movie. My father walked out on my mother when I was a baby and I did not meet him again until I was thirty. Any writing talent I received from God came through him. My mother is the least talented person I have ever met—but her business mind is uncanny.
I suppose you could say I’m the epitome of a frustrated writer without the frustration. I believe God has given me an ordinary beginning, one common to most writers so that His grace will be revealed despite my imperfections. We are all geniuses in disguise waiting for God’s perfection to be manifested. In the meantime, I believe the “becoming” is more important than the end. In the becoming, we learn how to work out our salvation, our struggles, and our writing dreams.
LAURA DAVIS:  How long have you been writing?
LORILYN ROBERTS:  I’ve been writing since I could hold a pencil. I would write stories imitating cursive writing and ask my mother to read them. She would gently say, “Would you like to read that to me?” And I would read her my illegible handwriting. I’ve kept one of the first stories I wrote in a box underneath my bed. Every few years, I’ll pull it out and read it. Then I’ll dubiously wonder if my writing has improved after forty years of court reporting, captioning, publishing seven books, and receiving my Masters in Creative Writing.
I love writing more than reading, cooking, or anything else—except perhaps lying on the beach with a good book or scuba diving. Sometimes I wonder if God has put me in a position where my writing hours are limited so I must balance my life with the mundaneness of everyday living. Otherwise, I might become a hermit and never leave my writing corner. I love losing myself in stories, the creative process of building an imaginative world, and then figuring out how to share that with others.
Writing for me is magical. Sometimes we forget that God is magnificently creative. He longs for us to embrace that magical part of ourselves. Jesus said, “If you don’t believe in me, believe in the works I do.” I see that as a call to use our talents to glorify God and to reveal to readers God’s creativity through our words.
I feel closest to God when I am writing. Sometimes I will hear God say to me, “That’s boring. You can do better than that.” I remind myself, don’t compromise for the sake of expediency. Give the reader every last ounce of creativity I have so God will know it’s my best—for His glory, His honor, His kingdom.
LAURA DAVIS: What is the hardest thing about writing for you?
LORILYN ROBERTS: The hardest thing about writing is finding the time. I’m a single parent, although my youngest is almost grown, but everyday living takes up a sizable chunk of time. Writing in the middle of the night works best. The only thing that might disturb me is a cockroach looking for a free meal, and as long as I can spray him with a half a can of poison and make sure his wiggly legs stop moving, I can go back to finishing my scene.
Otherwise, my mind will be on roaches and other disturbing thoughts that shouldn’t be in my book. I had hoped our three cats and dog from the humane society who spend ninety percent of their time sleeping could earn their keeps by disposing of them for me. Occasionally, I’ll find an abandoned roach leg on the floor and wonder who the murderer was. When you live in Florida, you adjust or move to colder climates.
LAURA DAVIS:  Can you tell us about your new book? 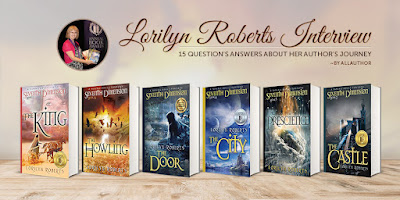 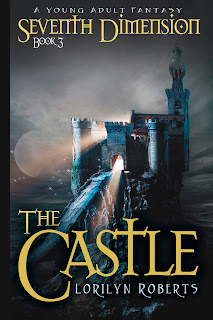 *~*~*~*
Lorilyn Roberts has won multiple awards for the Seventh Dimension Series, including The King: 2014 USA Best Book Awards Finalist and a 2014 Gold Winner for Faith-Based YA Fiction in the Literary Classics Awards, among other awards.
For special offers, follow Lorilyn on Twitter @LorilynRoberts and visit her Facebook fan page here. You can read more of her blogposts at LorilynRoberts.com
Lorilyn graduated Magna Cum Laude from the University of Alabama in 1991. Her studies included spending two weeks in Israel at the start of the Gulf War and touring England, Australia, New Zealand, and several countries in Europe. She later attended the Institute of Children’s Literature and earned her Master of Arts in Creative Writing from Perelandra College.
Published inGuest Posts