Published by Lorilyn Roberts on December 8, 2013

Spread the love
Brother Half Angel
By Martin Roth

“Brother Half Angel” is the first in a series of international thrillers by Martin Roth. These feature Brother Half Angel, the leader of a secret new church military order dedicated to helping Christians under attack around the world.

In this first book of the series, he is dispatched urgently to China, where an underground seminary is under siege from fanatical sword-wielding members of a local cult who still pay homage to the bloodthirsty extremists who tried to expel all foreigners from China in the nineteenth century.

Scroll to the end to learn how to read more, and also to learn how you can buy the book for a special price and with the chance to win a $200 Amazon gift voucher. 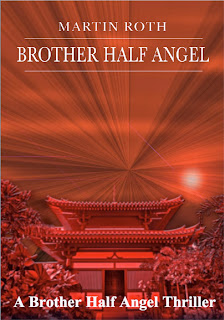 Daniel looked at Ling, clearly in great distress. He had not seen him like this before. Unfortunately, Jenny pressed on.

“What’s going on?” she asked. “What on earth is happening?”

“He’ll tell us,” said Daniel, annoyed at his wife’s apparent insensitivity. “I’m sure he’s going to tell us.”

But now Ling lapsed into silence, rubbing at his head with both hands as if trying to locate a dreadful itch, his eyes darting around the room. Finally, he spoke. “I don’t know who did it. Or why.”

“Have you called the police?” asked Jenny. Daniel translated.

“We can’t possibly call the police. You know that.” He was clearly angered by the suggestion.

“But someone’s been murdered.”

“You know that we can’t have the police here, nosing around.”

“But when someone is murdered…”

“He is a martyr. A martyr of the church. If the police come they will close us down.”

“We cannot take that risk.”

Once more he went silent.

Brother Yoon turned to Daniel and Jenny. “It’s a warning,” he said to them in English. Yoon was a stocky, middle-aged man from one of Korea’s gigantic mega-churches. He had lived in China for more than a decade, tirelessly aiding the underground church.

“I’ll explain later,” said Daniel. He looked back at Yoon. “At the temple? All those men practicing martial arts?”

In their two months in Fulang, Daniel had sometimes taken to riding one of the seminary bicycles around town to explore. In this hectic and ugly environment, the temple actually stood out as a mini-oasis of beauty and tranquility. Once he had seen lines of men there training in the martial arts, punching and kicking the air, and screaming in unison. This, he learned, was a local variant of kung fu known as Plum Flower boxing, even though it did not really resemble Western-style boxing.

“Why do they hate foreigners?” asked Jenny. “And foreign Christians?”

Yoon shrugged. “They just do. It gives them a feeling of superiority. Having someone to look down on. It’s not just foreign Christians. They hate all Christians. I think they really despise Chinese Christians. They see them as somehow slaves of the West – without honor or dignity. Forsaking their own Chinese heritage.”

“But they don’t come and murder people just because they’re Christians, do they?” asked Daniel.

“And why Brother Shuei? He was no different from any of our other students. Passionate for Jesus, wanting to spread the Word. But so is everyone here.”
📙📙📙📙📙
You can pick up a copy of Brother Half Angel from Amazon
Published inGuest Posts