Check out the first reviews on Goodreads

Gatehaven by Molly Noble Bull is a Christian Gothic historical novel set in a haunting mansion in the north of England where Ian Colquhoun and Shannon Aimee battle a Frenchman with dark secrets—spiritual warfare vs. the occult. Will they learn enough about God’s words to defend themselves and others or will evil overcome them?

Here is  short interview with Mary Noble Bull
QUESTION:  I understand that Gatehaven is a Christian Gothic historical novel. What exactly is that?
MOLLY:  A Gothic might be described as a novel or movie set in a castle or a scary mansion, and there is often a young woman in the story who is in great danger—a damsel in distress. Some older works which many consider secular Gothic novels are Jane Eyre, Rebecca and Withering Heights. Gatehavenis set in a scary mansion in the north of England in 1784, and it is Gothic novel in the true sense but with a strong Christian message. I call Gatehaven a Christian Gothic.
QUESTION:  Interesting. Scary horror books and movies are very popular now, especially with the young, and some are set in scary mansions. Are the bad guys in Gatehaven otherworldly characters like vampires, werewolves, zombies, ghosts, or monsters from outer space?
MOLLY:  No. There are no monsters in Gatehaven. All the bad guys are human.
QUESTION:  The Bible says that whatever is lovely and of good report are topics we should think on. So why would a Christian write a scary novel like Gatehaven?
MOLLY:  Good question. I asked myself that same thing before, during, and after writing Gatehaven, and here is my answer. Everything will be lovely and of good report in the New Jerusalem, but it has not arrived from Heaven yet. Christians live in an evil world filled with people who don’t know Christ, and as you said above, scary books and movies are popular now. So what should Christians do? Should they be willing to go where non-believers live—even into bars—in order to preach the gospel of Jesus Christ? Or should they simply preach to the choir? Each Christian writer must answer those questions for themselves. My answer is found in the pages of my newest novel, Gatehaven.
QUESTION:  The cover of the novel says that Gatehaven has a strong Christian message. What is that message?
MOLLY:  There are many Christian messages and themes within the pages of the book. Some are hidden while others are easy to find. Maybe the most important theme is Spiritual Warfare vs. the occult. The Bible has a lot to say about the danger of occult practices which I believe go hand in hand with Idolatry. It was my hope that all who found the cover and first pages of Gatehaven intriguing would pick up a copy and read it to the end, especially those who need to read it the most.
Occult beliefs and practices, also called the New Age, are found in books and movies everywhere, including cartoons for young children. If parents and teachers know nothing about these evil practices, how can they warn others about them, including their children? Spiritual Warfare vs. the New Age/Occult is the main theme of Gatehaven. However, there are others.
QUESTION:  Molly Noble Bull is known for her sweet romance novels. Is Gatehaven a romance novel?
MOLLY:  No. I would describe it as a Christian Suspense novel. But there is a romance woven into the plot.
QUESTION:  What about damsels in distress?
MOLLY:  Yes. Shannon, the main female character in the book, is in great danger, and she is not the only girl in peril. There are several.
QUESTION: Tell us about the bad guy or guys.
MOLLY:  There are several bad guys in Gatehaven. But the main bad guy is a Frenchman with dark secrets and evil motives.
QUESTION:  I saw a round symbol on the cover of the book. What is that all about?
MOLLY:  Gatehaven won the 2014 Creation House Fiction Writing Contest while it was still a manuscript, and that was a national contest. Part of my prize for winning was the publication of Gatehaven in trade paperback and as an e-book. After several unavoidable delays, Gatehaven was published on March 4, 2014.
Enjoy an excerpt from Gatehaven by Molly Noble Bull.
*~*~*~* 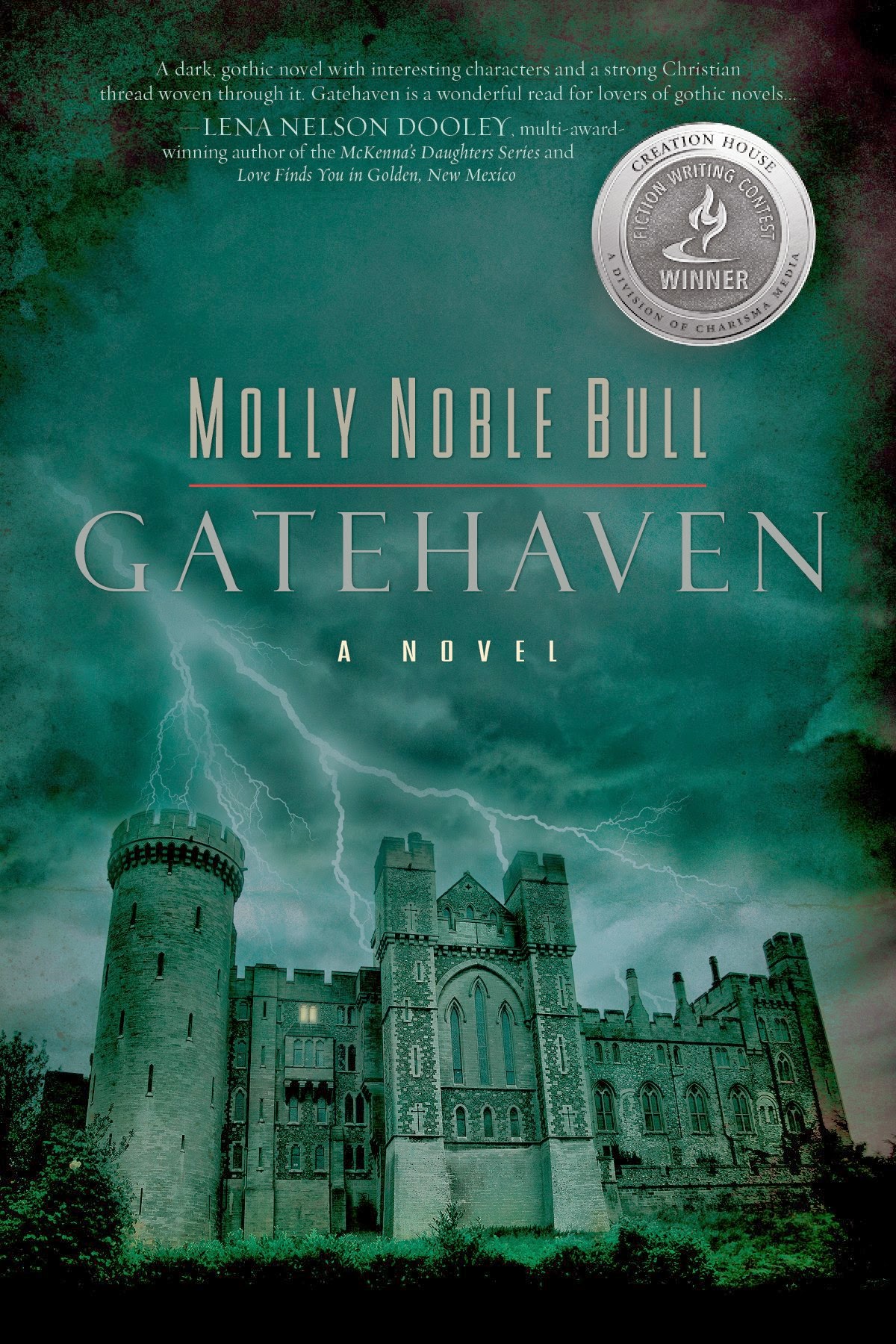 His name was Leon Picard. But Etienne Gabeau was the only name he’d answered to since making England his home.
He stood at a window in his sitting room, smiling inwardly as he looked out. “The haunting presence that surrounds your mansion always amazes me, my lord.”

The young earl made no reply.
“Christians who read the Bible might say the atmosphere at Gatehaven is quite the devil’s doing. We both know why.” Leon/Etienne’s laugh had mocking overtones. He pulled his dark cape closer to his thin, shriveled body. “It’s a bit chilly tonight. Surely you must have noticed.”
“Of course I noticed.” The earl laughed from across the room. “An icy rain was coming down when I arrived. You might have to put me in a spare bedroom for the night, Monsieur. And why did you mention the Bible? Who among our circle of friends pay any mind to it?”
“A point is well taken.” The Frenchman pushed back a curl from his eyes.

His thick mass of dark curly hair had more white strands than black, making Leon look older than his forty-five years. But twenty years ago, he was called handsome.
“Still,” Leon continued, “to the local villagers your estate is quite mysterious. It reminds me of structures I saw in France, while growing up. And who can forget the red gate which gave Gatehaven its name?”
“When did you learn of the red gate, Monsieur Gabeau?”
“I learned the secret when your late father was the earl. You were but a boy then.”
Lightning cracked the night sky. Thunder boomed.

“I saw it again, my lord.”
“Really?” The earl’s weak smile indicated that he was mildly interested. “What did you see?”
“Gatehaven…during that flash of lightning.”
Someday I will have Rachel and own Gatehaven as well, Leon vowed mentally.
The earl cleared his throat. “I’ve decided not to go to Scotland after all, Monsieur.”
“Not go?” Leon turned around in order to face him. “You must go.”

Leon Picard limped to his high-backed leather chair near the fireplace, tapping his cane on the pine floor as he went. “You will go.”
“I beg your pardon.”
“I said that you will go.” Leon hooked his cane on the arm of his chair. Then he sat down and reached for the portrait on the small table beside him. “I demand it.” Leon’s words, spoken with his usual French accent, hung heavy in the air.
The earl didn’t answer.
Leon thought that Edward Wellesley, the Earl of Northon, looked stiff—as if he’d suddenly turned to stone. At last, the earl gazed at Leon from a chair facing his.
“Demand?” The muscles around the young earl’s mouth slowly relaxed. “You have crossed the line, sir. Besides, I cannot go to Scotland. I have pressing business here. However, a French gentleman like you should enjoy such a journey.” His smile was edged in sarcasm. “Why not go yourself?”
“On these crippled legs? I think not. Besides, she would never receive me.”
“I am sorry. But it would be impossible for me to leave the country at this time.”
Leon turned, gazing at the fire flickering and popping in the hearth.
“You want the money, do you not?” He looked back at the earl like a hungry cat that cornered a mouse.
“But of course. You know I need money to pay my gambling debts.”
“Precisely.” Leon didn’t miss the fleeting expression of fear that crossed the younger man’s face. “I recently bought all your debts. I will destroy them all, but only if you do exactly what I say. At dawn on the morrow, you will set out for Scotland. And do dress warmly, my young friend. It will be cold out.”
The earl’s forehead wrinkled. “You say her last name is Aimee, and she lives in the village of Luss. But how would an English earl meet a Frenchwoman living in Scotland?”
“I believe your family owns a hunting lodge near Luss, does it not?”
The earl shrugged. “Even if I saw her on the street or near the Loch, I would never recognize her. What is she called?”
Leon’s quick laugh held a trace of mockery. “In France, she was called Rachel. I see no reason why that would not be her name today.” Leon grabbed the pearl handle of his cane with his left hand, leaned forward, and handed the portrait to Edward. “Look at this portrait carefully. Burn it into your brain. When you have brought her to me, your debts will be paid in full—and not a moment sooner.”
“But how can I convince her to come to England? I don’t even know the woman.”
“You are a fine-looking young man with your gold-colored locks and blue eyes. I am sure you will find a way.” Leon rubbed his aching knee. “Romance her. That should meet with success. Tell her you love her and plan to marry her. Women like that. And my spies tell me that she is not wedded at the moment.”
“You have known me long enough to know, sir, that I am not the marrying kind.”
“Have you no wits about you?” Leon sent the earl a harsh glance. “I don’t want you to actually marry her—only promise that you will.”
“I cannot see how…”
“Tell her you want her to come to England to meet your family before the engagement is formally announced.” He smiled. “Yes, that would be the thing. She is a peasant woman, but well educated.
Apparently, at one time her father was a teacher and a historian of sorts; she will understand that you must have your mother and grandmother school her in the ways of the quality before she becomes a part of it. And do smile a lot, Lord Northon. Let her see those sparkling teeth of yours.”
“I will do as you say. But I doubt it can possibly work.”
“It will work. Or you could find yourself in debtor’s prison.” Leon sent the earl another smile—long and slow and filled with hidden meanings that only Leon and Lord Northon could know. “And on your way back to England, stop by the chapel near Edinburgh your grandmother told you about. Do you know the one I mean?”

Gatehaven, Molly Noble Bull’s Christian gothic set in Europe in 1784, won the 2013 Creation House Fiction Writing Contest while still a manuscript, and Gatehaven is the novel being featured today. However, Molly’ first two published novels were published by Zondervan. Her Zondervan novels were later reprinted and published as Promise Romances from Guideposts. Molly also sold novels to Love Inspired and Tsaba House. Westbow Press published The Overcomers: Christian Authors Who Conquered Learning Disabilities, a non-fiction book she wrote with four other Christian authors. Molly owns the rights to her Zondervan romance novels now, and she will soon self- publish The Rogue’s Daughter as an e-book. Rogue is a western set on a South Texas cattle ranch in 1890.
Published inGuest Posts