Published by Lorilyn Roberts on February 17, 2022

When I was in high school and learned about the holocaust, I asked myself, how could someone as evil as Hitler rise to power and do what he did, and how could the masses let him do it?

Last weekend, I went to visit my family in Atlanta. My sister’s husband had the T.V. on, and it was airing the above show, The Complete Story of Hitler and the Nazis. I was drawn into the docudrama and couldn’t believe the parallels to what’s happened over the last two years from the onslaught of Covid-19.

Some of the parallels include the following:

1. How quickly Germany changed once Hitler came to power. Look at how almost overnight our world changed with Covid-19.

2. Eugenics. Hitler wanted to make the German race completely pure by eliminating those who were frail, of “inferior” lineage, Jewish, old and infirmed, and physically/mentally/emotionally challenged. That is what we’ve seen with Covid-19. Watch the video up above with Mel K and Dr. Ardis if you don’t believe me.

3. The hypnotic power Hitler had over the nation. Trusting people were deceived by his charisma, authoritative persona, and sweeping agenda. In America, everything Dr. Fauci, the CDC, and NIH recommended was followed without question, without discussion, and without exception.

Not just ordinary people (who may have had justification if their only source of information was the biased media), but so did doctors, nurses, pharmacists, hospitals, and almost every medical establishment in America. Whatever Fauci said was what everyone believed to be true. Few people spoke out against medical tyranny, and if they did, they were censored and annihilated in one form or another.

4. Hitler took away the rights of the people. During Covid, governments worldwide seized control over their citizens, forcing them to live subhuman lives—wearing masks, limiting travel, living in isolation, and in some instances tracking those exposed to Covid.

5. Hitler shut down churches and dismantled Christian institutions, encouraging the worship of him and his Nazi party. Heil Hitler was a form of worship and idolatry. During Covid, all over the world, churches were shuttered. Some have still not opened.

6. Hitler abolished freedom of speech. Today, if you criticize the U.S. government, you are branded a domestic terrorist.

7. Millions died because of Hitler’s actions. In America, almost one million people have died from Covid, mainly due to the actions of those in the medical complex; i.e., doctors prescribing Remdesivir, a killer drug, and denying inexpensive, safe drugs like hydrochlorothiazide and Ivermectin. If you don’t believe me, watch the video above with Mel K and Dr. Ardis. 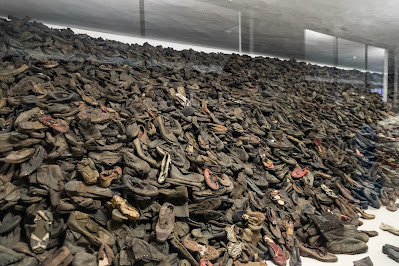 8. Hitler divided the masses between the Aryan race and the “deplorables.”  Does that remind you of Hillary Clinton calling Trump supporters “deplorables”?

Division is the name of the game—black versus white, vaxxed versus unvaxxed, compliant versus non-compliant, red states versus blue states, Democrats versus Republicans, liberal versus conservative. And gender dysphoria. People want to be something they aren’t.

9. Hitler wanted power. We have global elitists in Washington and all over the world who want to take away people’s ability to be free, including homeownership and make them subservient to a few. Remember the motto from the World Economic Forum: “You will own nothing, and you will be happy.”

10. Hitler’s maniacal vision led to World War II, causing the deaths of almost eighty million people. If history is cyclical, which we know it is, chances are we will be facing World War III within the next three years.

11. Because there was so much occultism behind Hitler’s rise to power, I will end on number 11 here to make the point. There is a hidden agenda behind this Covid “plandemic.” The word for “pharma” in the Bible is sorcery. The second half of Revelation 18:23 states: For thy merchants were the great men of the earth; for by thy sorceries were all the nations deceived (KJV).

I would encourage everyone reading this blog post to please watch the video with Mel K and Dr. Ardis up above, as well as the videos I’ve linked to on Amazon Prime. Jesus said in Matthew 24:4: Take heed that no man deceive you (KJV).

The only way not to be deceived is to know the Bible, pray, and be aware of what’s happening in the world in light of Biblical prophecy. Perhaps if the German people had done these things, they would have had the power of the Holy Spirit within them to rise up against Hitler and stop his madness.

What can you do in your corner of the world to make a difference? Ask God. And He will show you.