HOW CAN WE WIN MORE YOUNG PEOPLE TO CHRIST: Christian Blogger Lorilyn Roberts

Published by Lorilyn Roberts on November 15, 2019 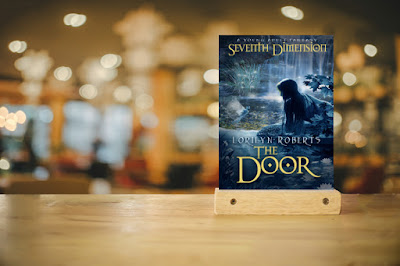 I would like to give away some copies of Seventh Dimension – The Door for Christmas.
I’m going to share something that’s been on my heart for a while, and I’ll select a winner from those who leave a comment.
Even though I’m not as young as I used to be, I still love young adult books, probably because I remember how much I enjoyed reading books as a teen. When I was twelve, I remember falling in love with Jesus, or, more succinctly, I remember the first time I felt loved by Him unconditionally.
In many ways, I was Shale Snyder from the Seventh Dimension Series – bullied, smart, and insecure, and spent my early years in a broken home. My childhood pet, Gypsy, came to me much like Much-Afraid did with Shale, unexpected and miraculously, and I had a dark secret I never wanted to share with anyone.
But enough of the similarities. Through the years, I’ve come to appreciate how much writing has helped me to grow as a person. When I write, I clear out cobwebs from my mind. More often than not, they are lies I’ve spun from mistakes rooted in condemnation.
I remove stones from my heart that weigh me down, and I escape into this beautiful dimension of enchantment as I commune with God, my Lord, and Savior. Sometimes it’s hard to turn off that voice in my head at night when I go to bed. I just want to create stories.
As I look at young adults today, their world is different from my world of long ago. Teens have so much more materially than I ever had. I didn’t grow up with much in the way of those kinds of things. I read books.
My life was forever changed when I discovered I could read at the age of eight. You see, as strange as it may sound for an award-winning author, I was forced to repeat the first grade because I couldn’t read.
If I could give one bit of advice to the young people of today, it would be this: You can make your plans, but the final outcome is in God’s hands (My paraphrasing of Proverbs 16:9).
I believe the affluence of America today has hindered the appetite of many for the things of God. Young people see what we have in America as theirs, and while our country has its flaws, it’s still the greatest nation in the world.
If you are willing to work hard at something, you can succeed. If you are eager to get an education and work hard at something, you can be an achiever. If you are willing to postpone gratification, work hard, get an education, and make many sacrifices, you stand a good chance of achieving your dreams.

Maybe you want to be a professional basketball player. Perhaps you long to be a lawyer. The list is only as short as you make it. Practically anything is achievable because America is great and opportunities abound.

But what happens when stuff happens? When things don’t turn out the way you thought they would? When tragedy strikes?
I remember many years ago going somewhere with one of my daughters and the family of a friend of hers. She was a teenager at the time, and I remember getting into a discussion with my daughter’s friend’s father. He surprised me by something he said. His comment basically was this: “Why talk about the end times with our kids. Let them live their life, get married, and have a family. They don’t want to think about the world coming to an end or the Lord’s return. They just want to live their life.”
I didn’t have a good response to him at that time because I remembered struggling with that same thought also when I was young. There is one particular memory I recall as if it happened yesterday.
I was putting my husband through medical school at the time, and he was in his second year of a four-year residency. We were watching a show on HBO, and basically, it was a documentary focusing on an end-time scenario, primarily based on the writings of Nostradamus (not the Bible).
That was back in the days before I knew not to trust such writers. While there might be a degree of uncanny accuracy in what they say, it’s not based on the Bible, and therefore will never be a hundred percent accurate. Anyone who predicts anything that is not one hundred percent accurate is not a prophet of God. Occultists are relying on demonic powers, and the Bible tells us not to listen to them.
I digress. That’s not the point of this article. The point is, as I sat there and watched the documentary with my then-husband, in my heart, I was telling myself, I don’t want the end to come. I don’t want Christ to return.
Not after doing all this work and putting my husband through medical school. I want to have children, buy a big house with a pool, and enjoy the fruits of what we’ve worked so hard for. That hard work was arduous labor for me as a court reporter. I put in long hours in a small town that didn’t think women should make more than minimum wage.
I wish I knew back then what I know now. And it is this: We long for the things of this world because we have no idea what better things God has in store for us in the next.
And while the years pass by, we fill our hearts with material things. We get married, and husbands commit adultery. We raise children who rebel against us. Young people turn from the Lord and go their own way. I personally know of two Christian families that had sons who committed suicide. I know of other Christian families whose children have chosen alternative lifestyles.
You see, we can make our plans, but because we live in a fallen world, sooner or later, we will face adversity. However, the imperfections of life in some ways can become a blessing. Without suffering, I don’t believe we can become all that God created us to be because He created us for so much more. Pain allows us to turn something meant for evil into good.

It is out of our suffering that we learn obedience, and in our willingness, we see God. We see beyond this world into the next. We know that we weren’t made for a fallen world – we were made for perfection in the future one.
Recently, I went to the “Understanding the Times Prophecy Conference” in Minneapolis. As I looked around at the audience of six thousand people, I didn’t see a single young person. I expected to see at least a couple, perhaps some homeschooling families who brought their teens. But nada, not one.
My heart’s desire is to win over young people to Christ. As I wrote many times throughout the Seventh Dimension Series, “time is an illusion until God’s appointed time.” 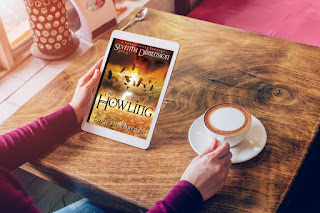 It’s true that most young people will have many years to live before God calls them home, but Jesus could return tomorrow. Death is only a heartbeat away. If only I could encourage young people to know Christ personally and to live their life for Him and not for themselves.
I won’t reveal the final scene in the last book of the Seventh Dimension Series, The Howling, but the idea is “to occupy” until God returns. That means for young people to live their life, get an education, raise their family, and enjoy life, but live for the glory of God, live to share God with others, live in a way that brings honor to Jesus Christ. Young people need to have a personal relationship with their Savior and live as if God could come back at any time. I believe the priorities for most young people do not put Christ first.
We must not live to please our own appetite. We should occupy until God’s return or until He calls us home. That’s a vastly different mindset than I could have imagined that day when my then-husband and I watched that apocalyptic HBO pseudo-documentary. I didn’t want to live for God. I wanted God to let me live the way I wanted to live. And in His mercy, He did. He showed me a better way, and it was a way of suffering.
So my question is, how can we get young people, teens, and young adults to realize how quickly time flies, that time is an illusion, and as James 4:4 says, our lives are merely a vapor, here for a little while, and then gone?
When we look around at the world today, we can’t help but come to the conclusion that God has made us for so much more. How do we get young people to seize this day, this hour, this moment, for Jesus Christ?
I’ve written the Seventh Dimension Series in hopes of reaching those who, like me, love to read. While it’s a dwindling number of teens, I believe our future leaders of tomorrow are the young people who read today. A person can’t learn all he needs to know to live well only through personal experience.
Reading opens the door to biographies of famous people, traveling to other places, and “tasting” different cultures. For the creative ones, reading can take a person to faraway places in time and space, as in the Seventh Dimension Series.
Books can teach the reader about God in ways he is unlikely to learn any other way. That’s one reason why God gave us the Bible, which includes sixty-six books written by many authors. Life is just too short to experience everything personally. But vicariously, a reader can experience so much more, and in my opinion, it can be better than a trip to Theme Parks. 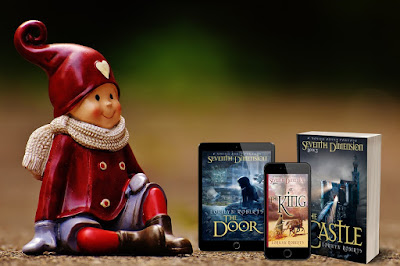 What do you think? Please share your thoughts in the comments, and I will choose some winners to receive a signed copy of The Door.

Tweet: http://bit.ly/LRWinDoor – I wish I knew back then what I know now. And it is this: We unknowingly long for the things of this world because we have no idea what better things God has in store for us in the next.