Published by Lorilyn Roberts on December 11, 2010 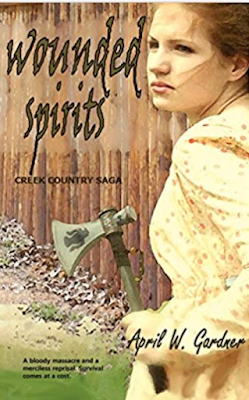 LORILYN: I would like to introduce April Gardner. April is a gifted writer with a wonderful personality that shines through in her writing. I met April on Facebook and approached her shortly after starting the John 3:16 Marketing Network. It was with much fear and trepidation that I initially asked people to join.

Luckily for me, April took me up on my offer; and for that I am grateful. She has been a tremendous asset to the John 3:16 Marketing Network, paving the way for others to follow in her footsteps. I share this short interview with April, which speaks to our hearts as each of us longs to write a best-seller on Amazon.

LORILYN: What motivated you to become a writer?

APRIL: There was a story that needed to be told. I came across the lives of the Creek Indians and the McGirths on the pages of history books and felt a burning need to know these people better, to understand how they might have reacted and dealt with the circumstances thrust upon them. There’s a certain mysterious and regal quality to our country’s Natives that lures me in. They had nearly perfected the true sense of community, selflessness, and passion. I just needed to live in their moccasins for a while.

LORILYN: How do you write fiction? Do you outline or fly by the spirit? Do you pick your characters out of thin air, or base them on people you know? And how did you create the historical setting of Wounded Spirits? Did you have to do lots of research or are you a history buff?

APRIL: I tried writing “by the seat of my pants.” Once. Nope, it’s not for me. I’m a detailed plotter. I build my characters based on what I need them to accomplish in the plot. Adela, for instance, needed to find it relatively easy to forgive some pretty unforgivable deeds. So I made her a people-pleaser. When wrong was done against her, she automatically found a way it might have been her own fault.

The historical setting for Wounded Spirits was practically created for me. Pickett’s History of Alabama is one of the most interesting history books you’ll ever read. It’s almost written in story form. Since Pickett interviewed many survivors of the Creek War, he was able to color the pages with amazing descriptions of the people and places found in Wounded Spirits. He made my research rather easy. Thank you, Mr. Pickett!

LORILYN: You reached number one status in Christian fiction as a brand-new author on the day of your public launch. Please share with others how you accomplished such an incredible feat!

APRIL: All the glory goes to God. He worked out the details and brought everything together at the last minute. Until a month ago I really didn’t understand the premise behind the John 3:16 Marketing Network. Looking back, it’s simple. Get everyone you can to buy the book on one certain day and the book’s Amazon ranking will rise—to #1, Lord willing. Offering e-gifts to everyone buying the book was key, which is why gathering supporters willing to donate a gift is so vital. At the John 3:16 Marketing Network, the support system is already in place. All an author has to do is ask for help and it’s there.

To make it seem less overwhelming, consider this. It doesn’t take much to start rising in rank. Four (known) sales the evening before the launch took Wounded Spirits from #800,000 (in Amazon Books) to #62,000. Creating specific subcategories for a book is essential. (“Historical” under “Christian fiction” under “fiction,” for example.) In the historical fiction category, Wounded Spirits competed against a much smaller number than under “fiction” which is what my book was originally categorized under. By 10am, Wounded Spirits had reached #1 in that sub-subcategory. A few hours later, the book reached #1 in Christian fiction which is a larger subcategory but not as large as “fiction.” It reached #2096 in books, which is excellent. One thousand more would have been even better, but I’m not complaining.

I have no idea how many books actually sold, but does it matter? Not really, because the goal was “best seller status” not “X number of copies sold.”

Two days later I’m still rather numb. It was certainly the highlight of my career so far. Yes, I now possess the title Best-Selling Author, but it was the incredible show of support from people who loved me and were rooting for me that brings tears to my eyes, even now. Acquaintances old and new turned out in droves to buy the book and cheer me on. It’s THEM I have to thank for my new title; and the Lord who somehow, amazingly, found me worthy of it.

I cannot say enough for the John 3:16 Marketing Network. It was a concept I struggled with for a good while, but once it clicked, I knew it would work. Its founder, Lorilyn Roberts, is amazing. She was there for me every step of the way, guiding me and cheering me on. Joining is free, so I encourage any author wanting to see their book sales go further to hop on board and see if this might not be the place for them. I’m betting it is!

LORILYN: Can you give us just a tiny peek into your upcoming next book?

APRIL: The next book, Warring Spirits, picks up four years after the war. The Creek are struggling to get back on their feet after being nearly decimated, and Lillian McGirth finds herself confronted with her own horrible life choices. To quote my editor “it’s a love pentagon” you won’t want to miss it. The war for land might be over, but the war in their spirits has just begun!

You can purchase Wounded Spirits from Amazon by clicking here.