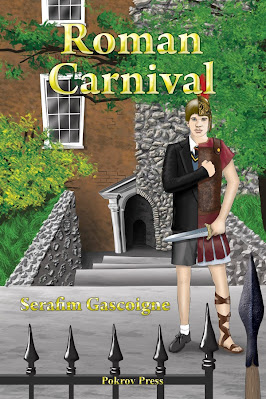 Lorilyn: Today I would like to introduce a fascinating author who writes books for young adults. Meet Serafim Gascoigne as he talks about his life and the launch of his new book, Roman Carnival.

I recently listened to an interview by you where you talked about your varied background which helps you to create memorable stories for Young Adults. Can you share some of that with us today?

Serafim: I have been a professional musician, an army medic, an intelligence analyst, teacher, and computer training consultant on three continents, and finally a pastor/priest here in the U.S.

I worked for British Intelligence in Berlin during the Cold War. This gave me exposure to the Russian language and Christians who had taken refuge in the West, but who nonetheless went through very difficult times when the Soviet army took Berlin. Their stories, in many instances miraculous, set the scene for my future writing. When Russia became open once more, I traveled to Siberia and other places in Russia.

Later, I taught in an inner-city school where seventy percent of the students were from the West Indies. I lived in Ladbroke Square, the location of  Roman Carnival, a few doors away from the Home Secretary and the film star, Kenneth Moore, and John Cleese of Monty Python fame. I used to see them shopping from time to time.

Lorilyn: I am always interested in whether fiction authors write by the “seat of their pants” or if they outline and develop the plot and then write. How do you come up with your fascinating storylines?

Serafim: I develop my characters first and then find a story for them. I usually work out a draft outline which I never stick to! The stories seem to write themselves. I enjoy researching the background and looking for unusual details. Did you know that the Romans worshipped the wrong god or that Nero did not play the fiddle (or mandolin) while Rome was burning?

I found some interesting menus such as dormice dipped in honey. Lots of facts that I hope will capture the interest of young readers.

Lorilyn: Which leads to my next question: Tell us a little bit about your new novel Roman Carnival.

Serafim: The discovery of an ancient Temple of Mithras causes great excitement among the residents of Ladbroke Square, London.  At the suggestion of the curator of the British Museum, the residents decide to hold a Roman Carnival, complete with fancy dress, refreshments, tours, and speeches.  However, unknown to the large crowd gathered for the Carnival, there are “ravens,” Roman assassins from 65 AD.

Intent on invading 20th century London, the Romans, members of the cult of Mithras, are thwarted in their attempt by two schoolboys, Anthony Archer and Hector Carter. As the drama unfolds, Hector is mistaken for a runaway boy soldier, while Anthony is thought to be Artemius, a high-ranking member of the cult of Mithras.

Mistaken identity or not, these boys begin to play a vital role in defeating the cosmic forces that have entered their time and reality through the Temple of Mithras.  A mysterious figure, the watcher Nikomedes, confirms that this is their destiny; it is part of their ancestral breath. Only Anthony and Hector are capable of sealing the conduit between past and present. How are they to do this? Nikomedes says that they will know what to do when the time comes.

Unlikely heroes in a battle with cosmic evil, the boys work as a duo, displaying common sense and courage in the face of many unexpected dangers.  Their only weapons against this invasion are their simplicity, honesty, and their ancestral link to the past.  Hector’s good and easy-going nature, loyalty to a friend, and courage play an important role in the drama. Anthony is not particularly courageous but together with Hector, he shines as a natural leader in times of danger.

This is a fast-paced historical/fantasy, combining Cockney humor and suspense.

Lorilyn: With your background, you could write for any genera. Why did you choose to write Young Adult books?

Serafim: I enjoy reading children’s literature and simply enjoy writing for young readers. I believe that it is important to communicate Christian values through fantasy and for teens through the supernatural activity of the Holy Spirit. Roman Carnival is written for a secular audience but the underlying theme is Christian.

I am concerned that many authors of fantasy dwell on masochistic, sadistic, and psychotic role models. Roman Carnival is no moralistic tale, but a scary, fast-paced, time-shift adventure. It’s not for the timid.

The underlying metaphysic is that we inherit not only the physical characteristics of our parents but a part of their spirit too. This is a surprise element in the story.

Lorilyn: Thank you, Serafim Gascoigne, for sharing with us your passion for writing for Young Adults. I can’t wait to get a copy of ROMAN CARNIVAL for my 12-year-old daughter who loves Christian fantasy.