Published by Lorilyn Roberts on February 28, 2011 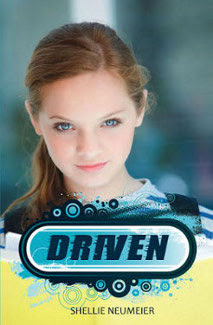 I met Shellie Neumeier through the John 3:16 Marketing Network and am excited to introduce her here. She is coming out with a new YA Novel, Driven.

Lorilyn: Tell us about your latest book Driven.  Do you have a favorite passage you’d like to share?

I can share the back cover blurb: “Robyn can’t help but notice the handsome new guy at her school. She ignores, however, the arrival of another being at Brookfield Central High School—a demon assigned to destroy her…

Robyn loves her friends, enjoys her youth group, and looks forward to meeting cute Caleb Montague. But when a caustic news reporter challenges her school’s prayer team, Robyn must choose: defend their right to meet on campus and pray for whomever they wish or back down at the principal’s request.

Now she must learn what God wants her to do. And she had better learn fast because there’s a supernatural enemy in town whose sole mission is to stop her—no matter the cost.”

Lorilyn: And how about the first couple paragraphs…

Shellie: “From a comfortable height above the trees, Sebastian circled the abandoned paper mill, drinking in the atmosphere of dereliction and decay surrounding the property. This place has more character than most of the humans I know. Half broken windows winked like the evil eyes of wayward souls, while snow drifts gathered in the corners. The wind toyed with the snow, whipping trails that could chill his feet and ankles. If he had feet and ankles, that is.

“Slipping through a second-story window, Sebastian watched a rat scurry across the dusty floor in a dash for the shadows. Like an angry cloud—black as asphalt, thick as cigar smoke—Sebastian floated after the rodent, watching with mild interest as it raced for another shadow and nearly collided with an old tom cat whose eyes glowed brightly with hunger. The tom sprang, but

“Sebastian turned away. He didn’t have time for these cat and mouse games today, no matter how much he enjoyed them. He had a bigger game to consider, and as he moved over the room, he thought about the girl he’d come to destroy.”

Lorilyn: Also, please share some of your writing goals.  What’s next for you?

Shellie: I’m thrilled to say I’m under contract with my mid-grade chapter book to be released in 2/2012 (MuseItYoung Publishing) entitled The Wishing Ring. My twelve and nine-year-old helped develop the plot, which makes the story one wild and imaginative ride.

I’ve also teamed up with Lisa Lickel in writing a romance novel. I enjoyed writing the young adult sections. But my favorite project is another YA novel written about a young boy with special needs. After a fit of rage, he finds himself struggling to survive life in a treatment center.  It’s been eye-opening writing that piece.

Lorilyn: What do you hope readers will get from reading your book?

Shellie: Hopefully, my readers will come away with a renewed sense of power. A sense of I-can-do-that, whatever “that” may be in their lives. And of course, I hope they come away having enjoyed a great ride from the story.

Lorilyn:  On a random note, if you were an animal, which one would you be, and why?

Shellie: Hmm. I’d love to be a Jaguar, filled with grace and speed; or a she-lion, fierce in her cub’s protection; but my husband likens me to that dog on UP (the one that says “squirrel” with energized distraction).

What Others Are Saying About Driven

Driven is a new take on the age-old battle of good versus evil. Gripping from the first page, this is one book you won’t want to put down. ~Leanna Kay, co-creator of www.samiesisters.com – a place for Christian girls to grow in faith.

Driven is a breathtaking book of tension, intrigue, and heartwarming emotion. From the moment I began to read until the very last word, I couldn’t put it aside. It held me enthralled! ~Lindsay Below, Head Over Hand-Bought Heels

In the tradition of This Present Darkness and The Screwtape Letters, Driven pulls back the veil between worlds and reminds us that our struggle is not against flesh and blood but against Satan and his minions. But the journey of Robyn and her friends against both physical and spiritual enemies also illustrates the more exciting truth: that ultimate victory rests with our God. ~Anne Mateer, Wings of Dream, September 2011.