Published by Lorilyn Roberts on September 17, 2011 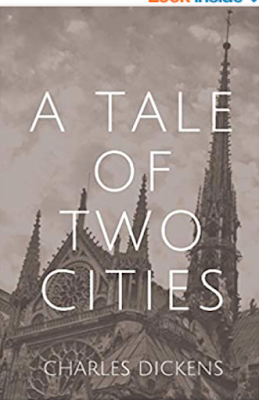 A Tale of Two Cities has a complicated plot with twists and turns that eventually unravel the tightly-woven story. The story begins in France, several years before the French Revolution, switches to England, and then returns to France.
Foreshadowing creates suspense, and as the story progresses, war ensues. Death is always a constant threat or recurring theme. In typical Dickens’ style, every character and scene is fully developed with symbolism playing an important role; i.e., the broken wine cask at the beginning and the reference to blood. The imagery reminds one of the Christian sacrament and the impending war in France.
Of particular interest are the characters; the protagonist, Lucie Manette, discovers her father has been found alive imprisoned in the French Bastille for the last eighteen years. Lucie is the embodiment of love, and her unconditional love restores her father’s sanity.
As the French Revolution draws near, the reader senses the progression of hopeless bloodshed through the continued foreshadowing of events. There is an overarching uneasiness that something evil is going to happen to the main characters. The darkness of one of the main antagonists, Madame DeFarge, and her constant knitting of the names of those condemned to death stands in stark contrast to the loving protagonist, Lucie Manette.Soon Darnay and Lucie marry, and a few years later, the French Revolution begins.
Dickens shows the intense suffering and affliction of the masses and the arrogant aristocracy, which is portrayed by the heartless Marquis Evrémonde when he runs over a poor plebian child. The impending conflict in France creeps ever so closer to the Manette family in England when Darnay travels to France and is arrested.
Darnay returns to Paris to free one of his former servants from prison but is imprisoned on false charges. After a year, he is released following a trial, only to be immediately seized again by the evil Madame DeFarge.
The father, who has been “recalled to life,” teeter-totters on psychosis, reverting to his old shoemaking occupation while in prison when Darnay for the second time is sent to the guillotine.
The tight plot, where nothing is wasted, builds to a stunning conclusion with the eventual escape of Lucie, Darnay, and their young daughter from Paris back to London, thanks to Miss Pross’ killing of Madame DeFarge.
One of the most poignant characters is Sydney Carton. In the beginning, he is an unhappy attorney that has taken to drinking and feels his life has been wasted; yet, he still longs for a meaningful relationship and finds it in the ever-so-compassionate Lucie Manette. Through her kindness, he becomes more than he could have hoped for or imagined. Her love reaches deep, and, in the end, propels him to make the ultimate sacrifice for Lucie and her family, where his purpose in living embodies ultimate redemption.
A Tale of Two Cities reminds me of those books and movies that need to be enjoyed twice; the first time for the overview of the complex plot, and the second time to appreciate the various symbolisms and motifs that make for a magnificent story.
Available on Amazon here.
Published inLorilyn's Book Reviews