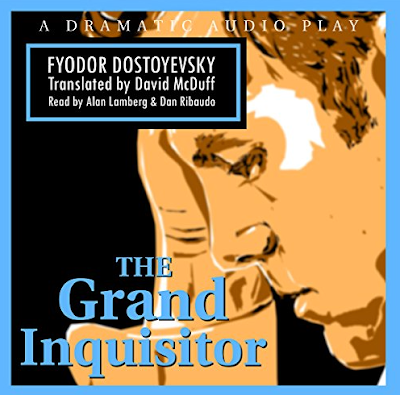 Analysis of The Grand Inquisitor
by Fydor Dostoevsky
Lorilyn Roberts
The Grand Inquisitor by Fydor Dostoevsky is a parable in his novel, The Brothers Karamazov. The story takes place in Seville, Spain, during the time of the Inquisition, when heretics were routinely burned at the stake. The first time I read The Grand Inquisitor I found it disturbing. There had been, according to Dostoevsky, during the sixteenth century, chatter among the masses about the fact that Christ had not returned, and many questioned if His miracles were real.
According to the parable, Christ came back once again, briefly, and appeared quietly in the midst of the people, healing those who came to Him. The crowds recognized Him and clambered to be near Him. Christ healed the blind and the needy bowed down to Him. But Christ was too good, too powerful, and the guards came and took Him away. The Inquisitor came to The Prisoner and asked, “Why, then, art Thou come to hinder us?”
There followed a conversation between the Prisoner and the Inquisitor which was disturbing. Christ’s thirty-three years on earth was distorted. The Inquisitor implied that Christ had failed at His mission; that He didn’t set men free, for example, and therefore it fell on the church to set men free. According to the Inquisitor, freedom meant bondage. The Inquisitor believed that men couldn’t be free, that they needed to be told what to do, and the church saved the masses by forcing them to cower in submission.
The Inquisitor twisted the meaning of Christ’s three temptations in the wilderness; speaking as if he (the Inquisitor) was Satan incarnate, using twisted logic with a kernel of truth when carried to its logical conclusion.
|
The parable encompassed more than a spiritual meaning and made a political statement; i.e., referencing the notorious conquerors of Timours and Ghenghis-Khan, who subdued men in the name of unity. The Inquisitor valued submission.
When one contemplates the ideology and the two choices presented in the parable—freedom versus bondage—and the Bolshevik Revolution that followed a few decades after Dostoevsky’s death, I wonder what Dostoevsky had in mind—who was The Grand Inquisitor? And surely he gave the Russian people more credit than what he opined. Did Dostoevsky not believe they could live in unity and freedom? Was the great experiment of American democracy in the 1800s not sufficient to persuade him?

Or was he prophetic? Did he believe the populace would be unable to handle the same freedom if given it? Or was he equating the Inquisitor simply with the time of the Great Inquisition and the depravity of mankind; that even if Christ had returned again, He would have been rejected? Did he accuse men after sixteen centuries of being just as wicked, concluding that Christ had failed once again? Could one surmise that the Inquisitor was Satan himself?

I read The Brothers Karamazov to understand the context in which the parable was written. The parable was told by Ivan, an intellectual, to his Christian mystic brother, Alyosha. Alyosha, in my opinion, was too weak but represented a moderating influence on the otherwise dark story that covered much of the book.
Toward the end of the parable, Alyosha stated to Ivan, “You don’t believe in God.” Those who don’t believe in God take the most loving aspects of Christ—His salvation and death on the cross—and belittle it. Perhaps Alyosha was comparing his brother to The Grand Inquisitor. Alyosha kissed his brother Ivan on the lips, reminiscent of Judas’s betrayal of Jesus with a kiss. But representing the opposite meaning—a feeble attempt at best.
Dostoevsky referenced the Masons in a less than glamorous way, accusing them of possessing the same mystery, perhaps in conflict with the Catholics’ pursuit of unity.
Dostoyevsky raised more questions than he answered. I felt a sense of hopelessness in the parable. Perhaps if Alyosha was more assertive and less passive, he could have countered the progressive mindset of Ivan—who attempted to intellectually provide answers to questions that did not require belief in a higher being.  Ivan’s tone was over‑reaching and intolerant. The two brothers represented types‑‑the intellectual versus the mystic (I will include the third brother when I analyze the entire book).
The parable provides no easy answers to the accusations of The Grand Inquisitor. Did Dostoevsky have an answer? Perhaps that’s the point—to give the reader the freedom to ponder, unlike the accusations of The Grand Inquisitor, who didn’t give people enough credit to even do that.
Perspective is everything. Having had more time to consider the book, The Brothers Karamazov, I wonder if my early thoughts were flawed. Upon further reflection, I don’t believe Alyosha was weak. He was humble. His responses were much like Jesus’ response to those who criticized Him. He never lashed back, except at the money changers. And perhaps Dostoevsky was making a broader statement about life. Communism followed in Russia shortly after his death. Is that what will happen here in America? Do people really want to think for themselves, or would they rather have the government or some other entity tell them what to do?
If you cherish your freedom, don’t be like the masses who expect the government to take care of them. Don’t take that government handout. Don’t expect the government to do for you what you can do for yourself.
God gave us freedom in Christ. He knew there would always be tyrannical governments, like the Romans, Alexander the Great, and Hitler. If each person takes a leap of faith, trusts God, and becomes his brother’s keeper, we can prevent our country from going the way of others.
As my mother says, our country is going to hell in a handbasket. Little by little, The Grand Inquisitor will have his way in America because as a nation, we have turned our eyes away from God. And because God is love, He has given us the freedom to be conquered—and I ask, what or who will conquer us?

To purchase The Grand Inquisitor from Amazon, click here