Published by Lorilyn Roberts on August 24, 2011 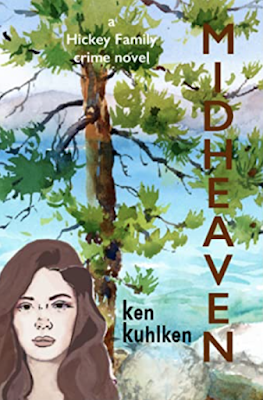 As a Christian, I found Midheaven a fascinating read. The protagonist is a 17-year-old girl, Jodi, in her senior year of high school on the threshold of adulthood.  The story begins with her hiding in a cabin in the , barely surviving on cans of food brought to her by her longtime friend, Charley.
Her life is miserable, like a beastly animal, rather than the beautiful young lady attending the year prior.
Little by little, the reader is introduced to the people in her life: Her dysfunctional parents; Mr. Oswald, her favorite teacher; Charley, her friend but not “boyfriend”; Maggie, her best friend, who marries Geoff, a Christian “freak”; and other, less important characters in the plot but important in the development of the theme of the book.
The characters represent a type or archetype worldview that is flavored with a distorted understanding of Christianity. Each person in his own way has been either enriched or destroyed by the perversion of his beliefs that justifies his sinful actions.
We have all seen these “types” in our own life: The holier-than-thou Christian who judges and beats you over the head with the truth; the woman, as in the case of Mr. Oswald’s mother, who is the epitome of a Jezebel; Mr. Oswald, who will never accept Christianity because of his mother’s influence; and Charley, who doesn’t profess to be a Christian, but who is more a “Christian” than most; and Jodi, who longs to be loved and accepted. To gain that love, she compromises her virginity with a jock at school, who later taunts and bullies her.
Underlying the main plot are multiple subplots—each person struggling with his own sin, making poor choices, and hurting others in the process. The one thing that seems to be missing in everyone’s life is “love,” except for the forbidden love that arises between Jodi and Mr. Oswald.
When Jodi is shown a video of herself secretly taped by someone making love to Mr. Oswald, her world begins to unravel. She becomes shamed by her actions and conflicted in her newfound faith, knowing what she is doing is wrong, but unable to conquer her guilt or feel God’s forgiveness.
Mr. Oswald is a coward, and it’s his cowardice that destroys him—without God’s love, we will do cowardly things that ultimately hurt ourselves and others, shattering lives and dooming us to death.
The long-planned escape to to live “happily ever after” never happens, and Jodi becomes a victim of everyone’s expectations for her, living in her own self-imposed solitary confinement.
But there is hope: She kills the charlatan who attempts to destroy her; she sees God’s beauty in the animals of the forest, in the trees and the flowers and the lake that bring her comfort and peace. And Charley is there, the always faithful friend and not her lover.  She asks herself, “Every day I wonder – what kind of man will sacrifice to help me please a God he doesn’t yet believe in?”
Jodi sees the berries in the forest, “still tiny and green.”  A dog attacks her that she fights off, and she discovers beneath his snarly teeth a scared creature, “whimpering and cowering.” She loves the unlovable and cleans the trash from the meadow.  The reader is left with hope for Jodi, and to ponder what it all means.
******
Ken Kuhlken earned BA and MA degrees in English at San Diego State University and an MFA degree in Fiction Writing at the University of Iowa. He is the author of novels, short stories, feature stories, and book reviews. His stories have been honored with Pushcart Prize nominations, a National Endowment for the Arts Literature fellowship, as a finalist for PENs Ernest Hemingway Award for the best first published novel, as a finalist for the Shamus best novel award, and as the recipient of the Private Eye Writers of America/St. Martin’s Press Best First PI Novel Award. He has taught in the MFA program at the University of Arizona and in graduate and undergraduate programs at San Diego State University; California State University, Chico; University of San Diego; Christian Heritage College; and Azusa Pacific University. Ken teaches writing and literature at Perelandra College. Visit Ken at: www.kenkuhlken.net
Published inLorilyn's Book Reviews