LORILYN ROBERTS BOOK REVIEW: “The Equation: Book 1,” by Malcolm Isted: Most Remarkable Nonfiction Book I’ve Read in a While

Published by Lorilyn Roberts on January 9, 2015

I have been doing tons of research for my third book in the Seventh Dimension Series, The Castle: A Young Adult Fantasy, and I stumbled across a very unique book. It’s not for everyone, but it will make you think. It will make you think the guy is a fanatic, but once you start reading it, you will find it very hard to dispute his findings. I venture to say this book is one of those “sleepers” that hasn’t been discovered yet. 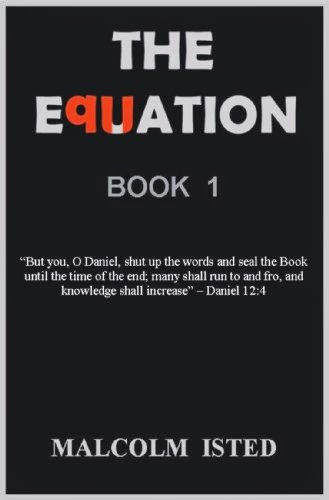 Book Description:
Six days after 9/11, on the last day of the Hebrew year 5761 (in 2001), Wall Street’s Dow Jones Industrial Index crashed by a world-record 684 points. Exactly seven years later, on the last day of the Hebrew year 5768 (in 2008), a new one-day record was set when the Dow plunged 777 points. In both instances, the global economy was on the brink of financial Armageddon.
This is now history, but what happens after this is prophecy – a prophecy of what will happen seven years later on the last day of the Hebrew year 5775 (in 2015).
When I speak about history and prophecy, I mean that what happened and what will happen on these dates was, and is, an unavoidable certainty. If some are speculating about the outcome and the meaning of this strange, repetitive phenomenon, it is because they do not know that these precise dates on the Hebrew calendar are encoded in the Bible.
I do not mean that through some obscure, private methodology, we can find codes in the Bible that point to these dates. Those who read THE EQUATION will see that they appear in every verse of the Bible, whether it is the Old or New Testament, and whether it is the original Hebrew, Greek, or the numerous English versions!
What does this mean? Why is there a secret timeline in the words of the Bible that has been deliberately designed to track the systematic destruction of the global financial system as we know it – and what will replace it?
Whether we believe in the Bible or not, the immutable laws of probability invested in this timeline are telling us what many already know, that our fiat monetary system is in the final stages of a catastrophic collapse. What they do not know is when this is going to happen and what will follow.
But THE EQUATION does know because it is based upon every word of the only book that knows the future. It is also based on the actual words that Jesus spoke concerning the day and hour of His coming, and not the mistranslated Greek words found in every Bible (a blatant and easily provable error using Strong’s Concordance). But for this great error that has become a foundational tenet of Christian eschatology (that no one knows this time), many would be prepared for what is to come.
Whatever you may think about the content of this book, it would be wise to remember that two of its predictions have already been fulfilled to the day in the greatest stock market crashes in history. And because an infinite number of complex codes from the same source have proclaimed that the end of 5775 (in 2015) will also be fulfilled in the same manner (but for a different reason), there is no logical reason to doubt its message.
Therefore do not say, “We have seen all these predictions before, and they never come to pass.” These codes have never been seen before, and they will be fulfilled because the timeline they have created is being fulfilled. This is what the prophet Daniel was referring to when he was told to “shut up the words and seal the Book until the time of the end” (12:4). The sealed words refer to codes, and the codes are the dates of the end formed by the words.
My Review:
(Lorilyn Roberts)
This review is from: THE EQUATION: “But you, O Daniel, shut up the words and seal the Book until the time of the end; many shall run to and fro, and knowledge shall increase” – Daniel 12:4 (Codes of the Bible) (Kindle Edition)
I COULDN’T FIND ANYTHING in this book that deviated from my personal understanding of the Bible and tons of information I will spend some time PONDERING. I would recommend to anyone who is not closed-minded or insecure in his or her Christian faith or understanding. At the very least, it will make you stop and think: Am I ready to meet my Lord and Savior, Jesus Christ?
*~*~*~*
I believe God put this book in my path to help me with a scene in The Castle and to develop the plot for the final book in the Seventh Dimension Series, Book 4, tentatively named The City.
If you like books that make you think, consider buying this one! Purchase here.
Published inLorilyn's Book Reviews