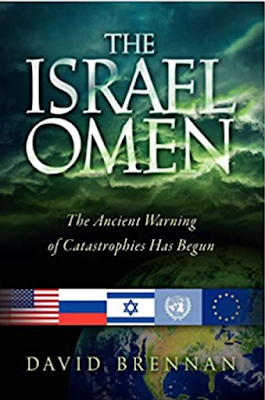 What Is It?
1.   October 30, 1991. The Perfect Storm off the New England Coast.
2.   August 24, 1992. Hurricane Andrew strikes South Florida, the fourth most powerful storm to make landfall in the United States.
3.   April 1993 to August 1993. Rains bombard several states and becomes one of the worst natural disasters in U.S. history.
4.   January 17, 1994. Most financially damaging earthquake in U.S. history strikes Los Angeles.
5.   June 5, 2001. Tropical Storm Alice hits the Houston area. Called the “Great Flood of 2001”.
6.   September 10, 2001. 9/11. The worst attack on American soil in U.S. history.
7.   April 30, 2003. Worst weather in U.S. history began on this day.
8.   June 2003 until August 2003. Worst heat wave in over 250 years strikes Europe.
9.   August 23, 2005. Katrina forms in the Gulf and become the most destructive natural disaster in U.S. history.
10. Week of July 23, 2007. Financial collapse across the globe.
According to The Israel Omen, by David Brennan, each of the above disasters was associated with an attempt by the U.S. and/or other nations to remove the “Promised Land” from the Jews and give them to the Arabs to establish a Palestinian State. Mr. Brennan has carefully documented the correlations and presented a compelling argument to support his conclusions.
I was studying in Israel from January 1 through January 15, 1991, when the State Department requested all nonessential Americans leave Israel. After being shown how to use a gas mask and shoot nerve gas antidotes into my thigh, I decided I didn’t want that much of an adventure. I took the last flight out of Tel Aviv to Switzerland and went skiing for a few days before returning home. The Persian Gulf War started the day after I left Israel on January 16, 1991.
Often when we visit another country, certain memories are etched in our psyche and become a filter through which we evaluate all future events and information; and so it was with my time in Israel.
Israel is small—too small to be chopped up more than it already is. The Jews live with the looming threat of war and all-out war. They are surrounded by Arab nations that do not like them. The Israelis want to live in peace and would do almost anything to make that happen—except forfeit land given to them by God.
There will never be land for peace because the land is not for the Jews to give. It belongs to God. Nothing angers God more than for world leaders to take what God gave to the Jews, as clearly stated in the Bible, and deliver it to the Arabs on a counterfeit peace platter. There is not any leader in the world that can negotiate a lasting peace in violation of God’s will without suffering under His judgment—as seen in the catastrophes that have happened each time a nation has tried.
While many will refuse to accept the premise given in The Israel Omen, I would encourage Christians to consider this:  Have all the lands given up by the Jews for peace brought peace?
As an American, I pray for the peace of Jerusalem and for our leaders to be Israel’s staunchest ally. Genesis 12:3 says, “And I will bless them that bless you, and curse him that curses you: and in you shall all families of the earth be blessed.”
As a Christian, I pray for my Jewish friends, both believers, and unbelievers. Peace starts with me and God gives wisdom to those who ask; and always, hope springs eternal.
To purchase The Israel Omen from Amazon, click here.
Published inLorilyn's Book Reviews