LORILYN ROBERTS BOOK REVIEW: “The Power and the Glory,” by Graham Greene

Published by Lorilyn Roberts on September 19, 2013 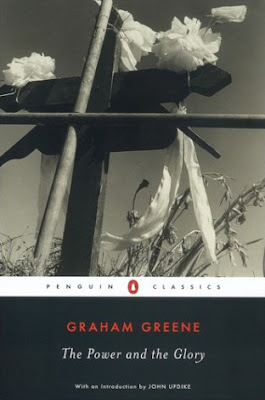 I initially had a tough time getting into this book—couldn’t find anything to enjoy about it. I came to the conclusion about midway through The Power and the Glory that this wasn’t a book to be enjoyed. It was a book to ponder deeper meanings of faith, politics, humility, commitment, sin, and consequences.

The protagonist, the priest, who is never named, is the only priest left in a certain state of Mexico where priests have been outlawed. He has spent the last eight years running from the police to evade capture. He is an imperfect archetype of a savior/martyr, haunted by his past failures and yet still struggling to remain committed to the priesthood.

The priest is a conflicted individual, but his character grows; at the beginning of the story he tries to escape on a boat, but at the conclusion, he goes back to the state where priests have all been shot. Knowing he will be caught and killed, he returns to hear the confessions of a dying murderer.

There were many characters in this book representing “types,” such as the antagonist, the lieutenant who hated the clergy; and the mestizo, a type of Judas. The many children represented hope, as poignantly shown in the final few pages when the young boy lets the priest into the house to hide him from the police. I most identified with the priest and his internal struggles. Greene did an excellent job of showing the priest’s outward struggle to avoid capture as well as his inner turmoil of sin and unrepentant spirit with reference to his illegitimate daughter. All the characters were real, deep, and memorable.

The takeaways from this book to help me be a better writer include:

1. Make every character in the book count for a purpose and a deeper meaning than just “another person” to fill up the pages.

2. Include qualities even in the antagonist that make him a sympathetic character—the story will be more believable. No one is all good or all bad.

3. Be willing to tackle a controversial position—a protagonist that is severely flawed and that falls short of the standard can still be redeemed, changed, and become a hero.

4. Think of ways to use people or animals or locations to enhance symbolic meanings that grow the story. For instance, the priest’s fight with the dog over the bone; the references to the dentist’s equipment and working on teeth;  the numerous beetles bashing themselves against walls—symbolize pain, the fight for survival, the baseness of human depravity, and loss of dignity.

5. What you write will linger later in the mind of the reader—shine a light of hope; i.e., the priest who knocked on the door and was met by the young boy.

6. Not all books are to be necessarily enjoyed, but perhaps serve a greater purpose. Do you want to only entertain, or are you willing to probe the deeper meaning of life and leave the reader with significant ideas to grapple with and ponder?
Published inLorilyn's Book Reviews