MANY LESSONS FOR A LIFE WORTH LIVING: Devotional by Lorilyn Roberts

Published by Lorilyn Roberts on August 9, 2010 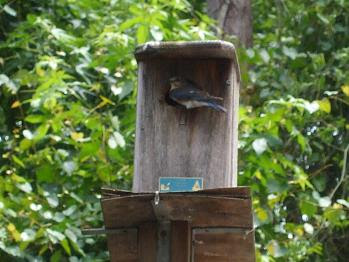 Every summer we have a nesting pair of birds set up residence in the birdhouse in our backyard. For many years, it was a purple martin house, though purple martins never used it. Great crested flycatchers found it and returned year after year. We knew they had arrived when we heard them in the trees. If they thought I was watching, they would fly away. Toward the end of the summer when the babies had fledged, the squirrels would move in and stay. When I took it down I found one large hole in the middle. The squirrels had remodeled the interior and the flycatchers had enjoyed a mansion for a home.

I replaced it with a bluebird house in early spring last year. I wasn’t sure if we would attract any bluebirds. When I saw a scout checking it out a few weeks later, I thought we might get lucky. After all, the birdhouse is located on prime real estate, what I would consider Park Place on a Monopoly board. It has a bird’s eye view of our pool; the canopy of honeysuckles, red tips, cassia, and water oak; and a small flower garden of shrimp plants, milkweed, pentas, and philodendrons.

This spring, I took a peek inside the house. I knew I should buy a new one. The base it rested on was warped and it was only secured by a plastic bag tie, but I was busy and soon forgot about it.

The bluebirds arrived and began rebuilding their nest. I watched as they carried leaves, moss, and twigs into the hole. A few weeks later, the faint sounds of babies could be heard. I was excited once again to watch the back and forth ritual of the parents feeding them. However, when a few days passed and I didn’t hear or see them, I became concerned. Did a predator get to them? I looked around the front yard to make sure I didn’t see a dead bluebird.

I gave up the search when I saw the mother and father working on the nest again. They appeared to be undertaking a rebuilding project. Something had gone awry and they had started over.

Several days later I went out for my daily swim. When I glanced at the wooden house, I was greeted by two beady eyes staring out of the dark hole. They were much too big to be a bluebird’s. Surprised, I examined the front of it and noticed the hole had been enlarged. It was big enough for one determined squirrel to squeeze into, though it was a tight fit. She was scrunched down as she stared out. She had usurped the bluebirds and now considered it her home.

It would have been comical if I had not seen the birds bringing in nesting material the day before. But what could I do? I got in the pool distracted and concerned. Was the squirrel sitting on the eggs, or worse, smothering the babies?

After a while, I watched the male and female fly over to their nest. At the last minute, they halted their approach in midair. They backed up and flew over to a tree. It appeared they had no idea there was a squirrel inside their quarters. I was upset because the squirrel had the entire canopy in which to build her house.

I climbed out of the pool, grabbed the pole that I used for skimming the water, and angled it up to the birdhouse. The squirrel jumped out like she had been stung by a hornet. Wild eyes flashed as she scrambled past me, jumped from the fence into the thicket, and scurried off faster than a startled fish.

My job accomplished, I dipped back into the pool and swam to the far end. I hoped to see the bluebirds reclaim their territory, but they didn’t return. Perhaps they were waiting for me to leave. It was getting dark anyway, so I got out, dried off, and went back inside to change.

Then I heard Joy’s frantic scream, “Mamma, the bluebird house fell over.”

I ran out of the backdoor. The box was partially burst open lying on the ground. The squirrel broke the plastic tie when he scrambled out of the tiny hole. Or maybe the birds had returned and knocked it to the ground. The house was destroyed beyond repair. Some nesting material had fallen out of the sides where the wooden boards had separated. I peered through the hole searching for baby birds or eggs, but to my dismay, instead, there were two baby squirrels inside. I did a double-take because I expected to see baby birds. They were very small with no hair and couldn’t have been more than a few days old.

Would the mother return? How could the squirrel have been using the house at the same time? The babies didn’t appear to be hurt. At least they were moving around a little, as much as baby squirrels with their eyes closed can.

The nesting debris had cushioned the fall, though I wondered how so much “stuff” could fit into such a small space. We needed to figure out how to put the birdhouse back on the post. The base of it had rotted away and there was nothing to which we could mount it. I managed to force the sides of the box back together.

I set the house on the table by the pool and went out to the garage to find something we could use. Joy later told me she saw the mother squirrel return and leave. That was a good sign, I hoped, that she would come back. I found a roll of sticky blue tape that we had used to cover the windows during the last hurricane season. We could use a screw to latch it on the post and run the tape around the sides and underneath it.

Joy and I climbed on top of the wooden fence and took turns pulling off tape and wrapping it like a band-aid. When we finished it was nighttime and we went back inside to watch.

A bluebird arrived immediately, but he refused to go in. He just sat outside the opening. We got tired of watching the perched bird, and he was in the shadows anyway. I went to bed thinking about baby squirrels, feeling guilty for my part in the disaster. I wondered what I would do if the mother did not return.

The next day I kept an eye out for her, but the birdhouse just baked in the sun with no squirrel to be seen. By late afternoon I had to do something. I took Joy to the gym and went to visit a friend who takes care of orphaned animals.

I asked her if she would take them if I retrieved them. She reassured me she would. I ran home, climbed up on the railing once again, and brought the box down. I set it on the table and looked inside, but to my dismay, it was empty.

My friend said it was possible the mother might have returned that night or early in the morning. She explained that squirrels make several nests, so if one nest is overrun by ants or she is scared off, she has another one to which she can carry her babies.

I still felt sorry for the birds. I went to the store and bought a brand new bluebird house—one that a determined squirrel couldn’t gnaw through. My neighbor come over later that evening and anchored it so it couldn’t get knocked over again. My biggest regret was that I didn’t do it sooner.

Sometimes God paints pictures of life lessons that can have many meanings. If I was a bluebird, I would have doubted my ability to raise a family. Would I have the strength to try a third time?

If I was a squirrel, I would have learned it doesn’t pay to steal someone else’s home. I needed to build my own.

But God had a different message for me—things may not always be as they appear. While I was expecting bluebirds, God delivered squirrels. How many times have I been so sure of myself only to find out later I was wrong? And maybe, just maybe, God wanted me to dive into the pool, enjoy a swim, and let Him take care of the animals.