THE COMING ECONOMIC EARTHQUAKE: LARRY BURKETT KNEW BACK IN 1994: A Christian Blogger’s Take on Politics and Prophecy

Published by Lorilyn Roberts on November 12, 2009 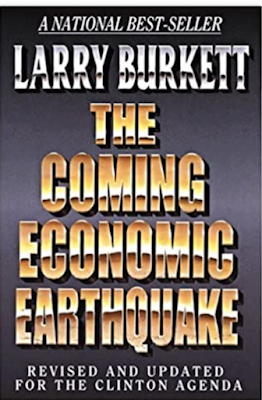 “It is hard to imagine any action that our government could take that would affect our economy more adversely than to attempt to nationalize our healthcare system. Not only has the Federal government demonstrated time and again its ineptness in controlling costs and operating anything efficiently but, in fact, they have continued to set the standards for inefficiency, bureaucracy, complexity, and cost.

“Look at any area the government has touched and see if you can say honestly it is cheaper, more efficient, and less complicated. If so, please write me so I can put the information in the next book.

“While other countries are desperately trying to privatize government-run agencies to avert financial ruin, we are trying to socialize another one-seventh of our whole economy!

“Based on what is happening in Washington today, I have concluded that no real changes are being made to bring Federal spending under control. Consequently, it is my conclusion that sometime prior to the end of this century, we will experience a severe financial downturn caused by taxes that are too high, too much debt, too much regulation, and too many Americans on government “dole.”

“The recession will expand into a depression as businesses fail, unemployment rises, and consumer confidence plummets. Even so, taxes will be increased to feed an ever-expanding program of government-supplied entitlements. The government will soon exhaust the last available resources as they tax all benefits, raid retirement savings, and eliminate the remaining middle-income deductions. Politicians will be caught in a Catch-22.

“The more they tax, the lower the net gain in taxes, and the more Americans are put out of work. With fewer available wage earners to tax, taxes are raised again. Finally, when taxes and credit are exhausted, the government will resort to the ultimate debt reduction plan: Inflation—soon to be followed by hyperinflation, as the government attempts to print its way out of debt.

“I don’t want to sound like an alarmist, but I do want to sound an alarm: This healthcare plan can destroy the foundation of our free enterprise system all by itself.”

This could have been written by any number of pundits on television or radio for last night’s financial news. But it wasn’t. It was taken from Larry Burkett’s book, The Coming Economic Earthquake, pages 249 and 250, published in 1994.

I read this book when it first came out in 1992, and I have to admit, I didn’t believe that many of the things he wrote way back then would happen—at least in my lifetime. It took some finagling to even find the book on the Internet. But I remembered some of his predictions and wanted to go back and reread them.

Larry Burkett was a Christian economist predicting these things when no one else was listening. Let’s take heed to his warnings. I pray that our Senate never passes this disastrous healthcare bill that will destroy our country and burden our children with taxes they won’t be able to pay.

I am fifty-four years old and always felt like the economy was too complicated to understand. I wanted somebody else to worry about it and tell me where to put my money in my IRA.

But about two years ago I forced myself to start keeping track of all of my expenses and learned how to live on a budget. I began to reduce my standard of living in simple ways and this last year I have done everything I can to pay off all credit card debts. I am close to having my house paid for.

You soon learn what is hard to do without, and it won’t be what you might think. For me, it’s that Starbucks Latte that is far too expensive that I’m addicted to.

I urge you to open your eyes and realize things can’t continue down this road. The first step is knowledge. I have posted a video on my website, “The Money Masters—How International Bankers Gained Control of America.” It’s three hours long, but if you don’t know this stuff, you should. I think of what Jesus said in Matthew 10:16, “…be as wise as snakes and as innocent as doves.”

Get out of debt. Live within your means. Encourage your Senator to vote against this healthcare bill. Yes, we do need healthcare overhaul, but we can’t afford to pay for the bill that was just passed by the House—especially a government healthcare plan that will ruin this country.

If we aren’t socialistic now, we will be with national healthcare. Worse than that, it will be rationed. Healthcare will be so expensive, the old folks won’t be considered worth saving. And I, for one, would like to think I am entitled to whatever I might need in my old age.

We are headed for deflation, more inflation, or hyperinflation, depending on which economic guru you want to believe. The only people who seem to think there are no major problems with the economy are the Washington bureaucrats who don’t tell the truth anyway.

Although I’m not sure when or how, but I know God will judge us just as He has judged the nations that came before us when they turned from Him. Many factors come to mind but the two most egregious are the millions of babies that have been murdered (aborted), and greed, including the money changers, the bankers, the government, the mortgage holders, the insurance companies, the people buying houses they couldn’t afford, the advertisers convincing the public to spend, spend, spend—think of all the clichés; i.e., you deserve a break today.

Make the time to read, listen, and get informed about the economic issues and healthcare problems facing our country. Pray that God will show you what you can do to be ready for the inevitable—whatever that may be.

By preparing now, God can use you to help others less fortunate down the road. The challenges may be as difficult as they were during the Great Depression or worse. As Larry Burkett wrote many years ago, there is a coming economic earthquake.
Published inChristian Blogger/Op-Eds