THE MAGIC OF THE OLYMPICS: Devotional by Lorilyn Roberts 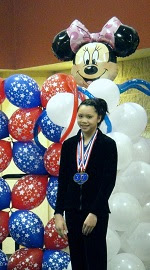 The music starts, the drums beat, and the culture of the country sparkles in the dazzling lights. The Olympians burst forth and we wait in anticipation for one of the greatest spectacles in the world to begin. July 27, 2012, London. An estimated 10,500 athletes from 205 countries will be competing.
The Olympics have special meaning for me. I am looking forward to being part of the team of captioners who will be providing closed captioning for the games on television. I also have a more realistic idea of how much work goes into being an Olympian. One of my daughters is a level eight competitive gymnast who has been doing gymnastics since she was four. She spends twenty hours a week in the gym, and I drive her an hour and a half five days a week back and forth.
Now almost fourteen, I look back through the years at how our lives have been wrapped around her training—and the thousands of dollars spent flying and driving across the country to attend competitions. This year she was the level eight state vault champion for Florida.
Recently we were watching the Olympic trials and I asked her, “How much better than you are they?” She laughed and shook her head. The ones who go to the Olympics truly are the best. I have often thought about what it takes to make it: You have to have a talented coach, parents that are supportive (that’s a biggie because it takes years of preparation to get there), plenty of money, not being injured at critical times, an athlete who is able to receive instruction and criticism, experience crippling failure and never give up; the self-discipline to sacrifice a social life and other typical things that children and teenagers do; the God-given physical and mental ability, and then peaking at the right moment—the Olympics are only held every four years. And probably thrown in there is fate—being in the right place at the appointed time and exposed to the one sport that the individual can excel at, and then having the coach who can transform a gifted athlete into an Olympian, like magic bound up in providence. Of the thousands who aspire to make it, only a few do.
The Bible speaks in I Corinthians 9:25:  “Everyone who competes in the games goes into strict training. They do it to get a crown that will not last; but we do it to get a crown that will last forever.”  I wonder if we were to take our faith as seriously as the Olympians pursue their training, what could we not do?
As I watch the Olympics, I will contemplate the enormity of what athletes can accomplish when they devote themselves to a sport greater than themselves; always amazed that for two weeks every four years, countries will lay down their arms and participate in a tradition that’s as old as Ancient Greece and the Parthenon; that we will sit glued to our television screens esteeming the talents of athletes whose names we can’t pronounce, but wanting to know everything about them; that we will celebrate together all around the world in a mystic tradition of mythic proportion—of diversity, of unity, of beauty, of art, of perfection, of gold.
What humankind can achieve through perseverance and an unquenchable desire to be the best at a sport is pure brilliance. The Olympics is magic in motion, art and destiny intertwined for a few. And for the rest of us, a moment to pause and reflect, living out vicariously the success of the winners—and anyone who competes is a winner. The world will be mesmerized by young men and women who will take our breath away and remind us that in a sense, we are one. We celebrate with them as their brothers and sisters and mothers and fathers and sons and daughters.
For a moment we will enter their world and be a part of it. We will cheer them on and applaud broadly, knowing they are truly Olympians. I can’t wait for the games begin!
Published inDevotionals