WHAT DO BEAVIS AND BUTT-HEAD HAVE TO DO WITH JESUS: Devotional by Lorilyn Roberts 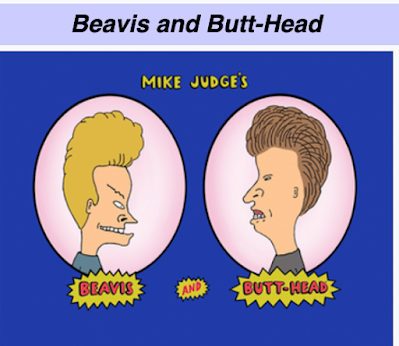 Last week I took my ten and a half‑year‑old daughter, Joy, to Wild Adventures in Valdosta, Georgia, for a special overnight mother‑daughter trip.  After spending the night in a comfortable hotel, we arrived shortly after opening at 10:30 in the morning with hot Georgia sunshine beating down and wet, humid air soaking our skin. As we lathered on the sunscreen and headed toward the gated entrance, I hoped there would be lots to do besides get sick on roller coasters rides. We were already dripping with perspiration by the time we got to the water park.

At Splash Island we found a haven from the heat and climbed up the voluminous steps to ride on the Kalani Blasters, two sets of slides that intertwined and lasted thirty seconds, dumping the rider into a large, cool pool at the bottom. As Joy and I waited our turn in the long line at the top holding an oversized inner tube, a little boy who couldn’t have been much older than three forced his way through the crowded line and positioned himself at the top of the open flume. He wanted to be the next rider down.

I looked around and thought to myself, where is this kid’s parent? What is he doing cutting in line? I wasn’t sure whether to speak up as I was in shock at his boldness to ignore all the others waiting patiently ahead of him. After several seconds when it was obvious he wasn’t leaving, several politely spoke to the young boy, “You must wait your turn. You can’t break in line like that.”

The same sentence was repeated to him several more times. I added my few words, too, just to support the others who had already spoken. The boy just stood there.

The park attendant who had been monitoring the flume looked up and saw what had happened. He spoke loudly to the young boy, “You must go to the back of the line. You must wait your turn.”

Everyone gently encouraged him to leave but he continued to ignore us. I looked around for his parents again who were no where. He had brought the entire procession of sliding down the open flume to a complete halt as he stood there defying the world.

Finally, the little boy got the point that nobody in the line was going to let him break in front. He dejectedly headed to the back to wait his turn.

I said to Joy, “He might be cute, but he’s not that cute.” We all looked at each other thinking the same thing. Something is missing from this picture—the parent.

Later that afternoon, when Joy and I had our full of the water, we headed over to the dreaded roller coasters. While Joy enjoyed getting dizzy and spinning and being centrifuged to oblivion—after all, she is a gymnast—I held on and tried not to die. My stomach screamed even louder. Fortunately I did survive to live another day.

Our final event was the Gold Rush, a smaller, family-sized roller coaster which Joy talked me into riding. I hope it will be my last one.  Of course, I said that the last time at Disney when she talked me into experiencing the Expedition Everest at Disney’s Animal Kingdom. I will spare you the bodily details on that one. If you are curious, you can watch it on YouTube—the full three minutes and eighteen seconds worth.

I stepped through the car of the Gold Rush and exited out the other side to place our personal belongings in a holding compartment. As I returned to my spot behind Joy, two wide‑eyed blond‑headed young girls were sitting in my seat.

All the other cars were full and everyone was waiting for me. I spoke to the little girls who might have been about eight years old, “You have taken my seat. You will have to wait till the next time to ride. My daughter is in front of you and I’m riding this with her.”

They stared at me but refused to budge.

So I tried again. “I was setting our belongings in the storage compartment. You need to let me have my seat back.”

Unflinching they continued to stare. Joy stared, too.

I said it again, this time a little louder. By this time I had gained everyone’s complete, undivided attention and felt all eyes glued on me, but I wasn’t going to give in.

“I’m sorry, but you have taken my seat. That is my daughter in front of you and I am riding with her.”

Then one of the little girls yelled at me, “You mean you’re not going to let me ride with my sister?”

“No, I am not.” I glanced over at the other people waiting impatiently, one lady in particular. Are those her kids, I wondered? Nobody came to my rescue. I said it again more loudly, “You are in my seat. I was putting my stuff over here and you need to get out of my seat.”

Finally, they reluctantly got out. The Gold Rush ride attendant walked over and seemed to be happy that the confrontation had ended peacefully without his becoming involved.

Then he added, “And you can’t ride the Gold Rush with only a swimming suit top. You must have a shirt on.” The girls glared at him disgustedly and promptly walked away.

I took my seat and enjoyed the easy ride thinking about the famous comedian, Rodney Dangerfield, who used to say, “I get no respect.”

After the Gold Rush roller coaster ended, the young lady who had been watching the conversation intently between us asked, “Do you know those kids?”

She shook her head in amazement as she walked away.

I thought about these two incidents at the park later. Where were the parents? After all, these were young kids. I didn’t let my ten and a half-year‑old out of my sight and these children were much younger than my own daughter. And how could these kids have such disrespect for authority and adults? Perhaps the answer is no further away than the Beavis and Butt‑head show I had captioned a couple weeks earlier that was broadcast on MTV-2. Let me share some script from the episode that aired on June 17, 2009. Brace yourself.

THIS IS SEX EDUCATION WEEK,

WE’LL BE TALKING ABOUT THE PENIS

DO YOU THINK THAT’S FUNNY?

DO YOU FIND IT AMUSING THAT

WE’LL BE TALKING ABOUT THE

WE’LL ALSO BE TALKING ABOUT

INTERCOURSE, AND WE WILL

DEFINITELY BE SPENDING A LOT OF

>> GIVE ME THAT FART KNOCKER.

WHAT ARE YOU DOING?

DAMN IT, THAT’S NOT FUNNY.

I NEED MY UNIT.

>> BUTTHEAD IS DOWN BUT NOT FOR

HE’S GOING BACK INTO THE TRUNK.

>> WHAT THE HELL IS THIS CRAP?

THE DEHYDRATED BALL GOT SO –

A JUNE BUG IN JULY.

AROUND AND HELP ME OUT.

HEY, I WANT TO DIP MY BALLS

WHO GIVES A DAMN?

I WANT TO DIP MY BALLS IN IT.

THAT EXTINGUISHER HAS GIVEN HIM

>> BEAVIS, YOUR BALLS ARE FILTHY.

GO TO THE BALL WASHER NOW.

In the 1960’s there was a hit song with a profound message, where have all the flowers gone?  I wonder today, forty years later in 2009, where have all the parents gone? Where has all decency gone? Where are our children and teens learning their values—from MTV 2’s Beavis and Butt-head? I hope not. The Bible says in Proverbs 22:15:  “Folly is bound up in the heart of a child.”  If parents don’t teach and guide their children, they will get their values from somewhere. Opportunities abound for the evil one to snatch up our precious little ones and hurt them.

The words of Jesus are vastly different from the script of Beavis and Butt-head. His words do not degrade our bodies created in His image, diminish our self-worth for whom He paid the ultimate price, or tear holes in the fabric of our hearts that need healing. Jesus is our ultimate example of love. He admonished his disciples in Mark 10:14: “Let the little children come to me, and do not hinder them, for the kingdom of God belongs to such as these.” Mark 10:16 tells us, “…and he [Jesus] took the children in his arms, put his hands on them and blessed them.”

These references and many others translate into “time.” Jesus took time. We must take time to be with our children. Not just take them somewhere and drop them off for a day and leave them to their own devices. As a single mother, if I don’t take that time, who will?

I don’t want to leave the reader with an uninspired view of today’s parenting world. As Jesus often did in His parables, I want to give “the other part of the story.”

It was Mother’s Day morning and I was on my way into the adult class for Sunday school when I received this text message:  “I want to wish you a happy Mother’s Day.”

I did not recognize the name or the phone number. I sat through the entire Sunday school class reminiscing about who had sent me such a wonderful text message. My two daughters had already made me feel special but to receive a message from somebody I didn’t know wishing me a happy Mother’s Day lifted my spirits even more. I felt very special to have been remembered by an unknown person.

Later that afternoon my curiosity got the better of me and I text messaged back the person, “Who are you? I don’t recognize your name.”

As it turned out, a young girl had tried to text message her aunt and had mis-entered the number and I received her text. We sent many messages back and forth sharing the blessedness of Mother’s Day and how much we appreciated our mothers and aunts and how we had quite so unexpectedly met in cyberspace. My children were quite amused at the flurry of words that were exchanged. I was sad when the text messages finally ended. A parent had taught their child how to love and the blessing had been “text‑messaged” to me.

I want my children to be a blessing to others. I don’t want someone to look at my children and say, “I get no respect.” It’s wonderful when a parent unabashedly tells you, “Your child is a joy to have overnight at our house.”

After a day at the Wild Adventures Park and seeing three children who did not know the meaning of respect, I am convicted of my need more than ever to be a loving mom. That translates into time. That might mean riding more roller coasters and flumes.

Hopefully, at another time and place, a person standing next to one of my daughters won’t be thinking, where is this kid’s parent? More importantly, I will be where God wants me to be, and it won’t be captioning Beavis and Butt-head. I look forward to pushing the delete button and sending those nasty words to the recycle bin. That show needs more than recycling. Our children deserve better.